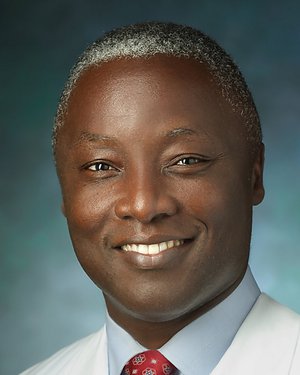 Dr. Boahene is a leading expert in facial paralysis surgery and facial nerve injuries and has pioneered innovative treatment protocols and surgical techniques in facial reanimation. He is the director of the Johns Hopkins Facial Nerve center dedicated to restoring facial balance, symmetry and animation to those who have suffered from facial paralysis and facial nerve disorders.

As an expert microsurgeon, Dr. Boahene routinely performs some of the most complex facial reconstruction procedures on the face including rebuilding of an entire nose, lip, jaw and facial defects resulting from cancer treatment, traumatic injuries or as a result of birth defects. He uses cutting edge 3-D technology, image-guided technology and tissue transplanted from other parts of the body to restore or replace missing tissues. He is a key member of the Johns Hopkins facial transplant program.

His cosmetic experience is broad and draws from patients across the globe. He routinely performs rhinoplasties, eyelid surgery, face lifts and other facial enhancing procedures.

As a skull base surgeon, Dr. Boahene has pioneered minimally invasive techniques for removal of skull base and brain tumors, repairing CSF leaks and has authored a major textbook on this subject.

Dr. Boahene received his undergraduate degree from the University of Central Arkansas. He graduated summa cum laude from Meharry Medical College in Nashville, Tennessee, completed a five-year surgical residency training program in otolaryngology-head and neck surgery at the Mayo Clinic in Rochester, Minnesota, and received fellowship training in facial plastic and reconstructive surgery at the University of Minnesota. As the recipient of the prestigious Mayo Brothers Distinguished Fellowship Award, Dr. Boahene was awarded additional craniofacial surgery training in Adelaide, Australia. He also received the Jack R. Anderson Prize for Scholastic Excellence for attaining the highest score nationally on the American Academy of Facial Plastic and Reconstructive Surgery certification exam.

Dr. Boahene is passionate about global surgical care and leads the Foundation for Special Surgery, a non-profit organization, providing highly specialized surgical care in several under-resourced countries. His self-authored autobiography, However Far the Stream Flow: The Making of the Man Who Rebuilds Faces, was published in 2016.