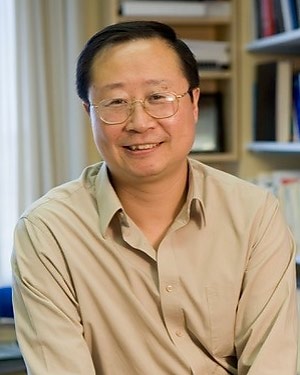 Dr. Jun Liu is a professor of pharmacology and molecular sciences and oncology at the Johns Hopkins University School of Medicine. His research focuses on the interaction between chemistry, biology and medicine. Dr. Liu serves as the co-leader for the Cancer Chemical and Structural Biology Program for the Johns Hopkins Kimmel Cancer Center.

Dr. Liu is the director of the Johns Hopkins Drug Library, where he and his collaborators aim to find new uses for often-forgotten drugs. Among the drug library's notable discoveries is that itraconazole, a widely used antifungal antibiotic, is a potent inhibitor of new blood vessel formation. To date, itraconazole has shown efficacy in treating non-small cell lung cancer in combination with pemetrexed, metastatic and castration-resistant prostate cancer and basal cell carcinoma.

Prior to joining Johns Hopkins, Dr. Liu was an associate professor in the Center for Cancer Research and the departments of biology and chemistry at the Massachusetts Institute of Technology.

Dr. Liu's work was recognized with a Director's Pioneer Award from the National Institutes of Health in 2010.

Dr. Liu's primary research interest lies at the interface between chemistry, biology and medicine. He and his research team employ high-throughput screening to identify modulators of various cellular processes and pathways that have been implicated in human diseases, from cancer to autoimmune diseases. Once biologically active inhibitors are identified, they will serve both as probes of the biological processes of interest and as leads for the development of new drugs for treating human diseases.

Among the biological processes of interest are cancer cell growth and apoptosis, angiogenesis, calcium-dependent signaling pathways, eukaryotic transcription and translation.

Current projects include the exploration of the existing drug space for novel pharmacological activities with translational potential; learning from nature—using natural products as probes of eukaryotic transcription and translation processes; and imitating nature—generating natural product-inspired macrocyclic combinatorial libraries for the discovery of novel inhibitors of protein-protein interactions.

Exploration of the existing drug space for novel pharmacological activities with translational potential.

Drug discovery and development is a time-consuming and costly process. To accelerate the process, we have assembled a library of existing drugs, known as the Johns Hopkins Drug Library (JHDL).  We have screened the JHDL in both target- and cell-based assays for novel pharmacological activities. To date, we and our collaborators have identified a number of known drugs that exhibited previously unknown activity. The most interesting hits discovered in our lab (Table 1) alone include: (1) Itraconazole, a widely used antifungal drug, was found to possess potent anti-angiogenic activity. Mechanistic deconvolution has revealed that itraconazole operates through a novel mechanism; it blocks endothelial cell cycle progression through the G1 phase of cell cycle via inhibition of mTOR and it also blocks cholesterol trafficking through the lysosome. We and others demonstrated that itraconazole inhibited angiogenesis and tumor xenografts in animal models, which paved the way for itraconazole to enter multiple Phase 2 human clinical studies. To date, itraconazole has shown efficacy in treating non-small cell lung cancer in combination with pemetrexed, metastatic and castration-resistant prostate cancer and basal cell carcinoma. (2) Nitroxoline, a urinary tract antibiotic, was found to inhibit angiogenesis through dual inhibition of the type 2 methionine aminopeptidase and SIRT1 and 2, which culminate in differentiation of endothelial cells. As nitroxoline has a unique distribution with the highest concentration found in the urinary tract, it has potential in the treatment of cancers of the urinary tract including bladder cancer. (3) Nelfinavir, an HIV protease inhibitor, was found to selectively inhibit HER2+ breast cancer cells. Follow-up studies revealed that nelfinavir is a novel type of HSP90 inhibitor, interacting with HSP90 at a site distinct from the binding sites of previously known HSP90 inhibitors. Nelfinavir and improved analogs have potential as new treatment of HER2+ breast cancer. (4) Clofazimine, an important component of the multidrug regimen for treating leprosy since the 1960s, was found to be a novel inhibitor of Kv1.3 channel, thereby blocking the activation of effector memory T cells implicated in a multitude of autoimmune diseases. In addition to the aforementioned hits, novel inhibitors of HIF-1, the hedgehog signaling pathway and the Hippo signaling pathway have also been identified from JHDL by our collaborators.

Learning From Nature-Natural products as probes of eukaryotic transcription and translation processes.

Natural products are an invaluable source of both molecular probes and drug leads, particularly anticancer and anti-infective drugs. Triptolide is a natural product isolated from the Thunder God Vine, whose extracts have been used in traditional Chinese medicine as immunosuppressive and anti-inflammatory remedies for centuries. It displays strong inhibition of all cancer cell lines tested to date, with a mean IC50 value in the low nanomolar range. Its molecular mechanism of action, however, remained elusive for decades. Using a top-down approach, we identified XPB, a subunit of the general transcription factor TFIIH, as a molecular target of triptolide. We are currently attempting to gain deeper understanding of the interaction between triptolide and XPB and the cascade of cellular effects as a consequence of binding of triptolide to XPB (Figure 1). We are also making novel analogs of triptolide to improve its pharmacological activity as leads for developing anticancer drugs. In addition to triptolide, we have also been working on a number of natural products, including pateamine A, lactamidomycin and mycalamide that inhibit eukaryotic translation and cancer cell growth.

The macrocyclic natural products FK506 and rapamycin are approved immunosuppressive drugs with important biological activities.  Both have been shown to inhibit T cell activation, albeit with distinct mechanisms.  In addition, rapamycin has been shown to have strong anti-proliferative activity. FK506 and rapamycin share an extraordinary mode of action; they act by recruiting an abundant and ubiquitously expressed cellular protein, the prolyl cis-trans isomerase FKBP, and the binary complexes subsequently bind to and allosterically inhibit their target proteins calcineurin and mTOR, respectively. Structurally, FK506 and rapamycin share a similar FKBP-binding domain but differ in their effector domains. In FK506 and rapamycin, Nature has taught us that switching the effector domain of FK506 to that in rapamycin, it is possible to change the targets from calcienurin to mTOR. We asked the question of whether we can replace the effector domain of rapamycin with yet another structural scaffold to target other proteins in the human proteome. Thus, we designed and generated a library of new macrocycles containing the FKBP-binding domain of rapamycin, which are named rapafucins (Figure 2). It is hoped that the newly generated rapafucins will be able to target novel proteins in the human proteome, particularly protein-protein interactions.