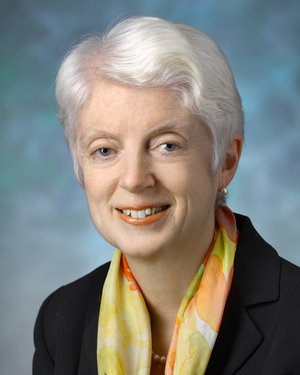 Dr. Joann Bodurtha is a professor of genetic medicine, pediatrics, and oncology at the Johns Hopkins University School of Medicine.

Prior to joining Johns Hopkins, Dr. Bodurtha was a professor of human and molecular genetics at VCU, where she had faculty appointments in the Departments of Pediatrics, Obstetrics-Gynecology, and Preventive Medicine and Community Health.

She received her B.A. from Swarthmore College and her M.D. and M.P.H. with honors from Yale. After a year of research at the Nagasaki University School of Medicine as a Luce Scholar, she completed her residency in pediatrics at Children’s Hospital of Philadelphia and worked as a USPHS physician on the Turtle Mountain Chippewa Reservation in North Dakota. She completed her medical genetics fellowship at Virginia Commonwealth University (VCU) in 1987 and is board-certified in pediatrics and medical genetics. Dr. Bodurtha joined the Johns Hopkins faculty in 2011.

At VCU, Dr. Bodurtha helped start the Masters in Genetic Counseling program in 1990 and the Va-LEND (Leadership Education in Neurodevelopmental Disabilities) program in 1995. She served on the American Academy of Pediatrics Committee on Native American Child Health for ten years. She was the Richmond YMCA Woman of the Year in Science and Medicine in 1997. She received the VCU School of Medicine first Innovation in Teaching Award in 1999, the SCHEV Outstanding Faculty Award in 2006, the Genetic Alliance Art of Listening Award in 2008, the AUCD Professional Achievement Award in 2009, and the VCU WISDM Professional Achievement Award in 2010. A member of the Leadership Metro Richmond Class of 2000, she served as president of the WISDM (Women in Science, Dentistry, and Medicine) organization at VCU from 2000 to 2003.

She has written more than 150 scientific articles, book chapters, and reviews and supervised more than 100 graduate students.

She is committed to improving access to genetic services and helping make all communities be more welcoming.