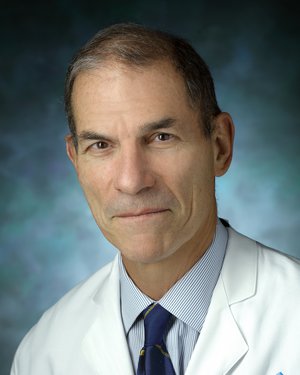 Glenn Whitman, M.D., joined the Johns Hopkins Division of Cardiac Surgery in 2009 as associate professor of surgery. His training began at the University of Pennsylvania, where he was a resident in surgery from 1979 to 1984. He then finished his general surgery training and then completed his training as a cardiothoracic surgeon at the University of Colorado. Thereafter, Dr. Whitman became an assistant professor at the University of Colorado and chief of cardiothoracic surgery at the Denver Veteran’s Administration Hospital, where he remained for two years. In 1990, he returned to his home city of Philadelphia, where he became chief of cardiac surgery at the Medical College of Pennsylvania, formerly Women’s Medical College, the first medical school in the United States to accept women. Dr. Whitman remained there for eight years before moving to the University of Maryland as chief of cardiac surgery.

He has served as the director of transplantation and United Network for Organ Sharing representative at Temple University Hospital in Philadelphia, as well as its director of perioperative services, managing preadmission testing, the operating room, and the post-anesthesia care unit. In 2007, he left Temple for Thomas Jefferson Hospital, taking over the responsibilities of running the cardiac surgery intensive care unit. In summer 2009, he was returned to Baltimore to run the cardiac surgery intensive care unit and oversee the performance improvement/quality assurance program for cardiac surgery at Johns Hopkins.

Dr. Whitman’s initial research interests were in cardiac ischemia-reperfusion injury and P31 nuclear magnetic resonance of cardiac bioenergetics, for which he received both National Institutes of Health and Department of Veterans Affairs funding. He has since become involved with quality outcome, and has presented at the American College of Surgeons and the Society of Thoracic Surgeons on the difficulties associated with performance improvement and quality assurance in the field of health care, particularly in the ICU.

This past year, Dr. Whitman has stepped down from his role as the Chair of the Society of Thoracic Surgery Workforce on Critical Care, a role he had held since 2014.

This past year he has participated in two major consensus statements on postcardiotomy shock (see below) and low ejection fraction CABG patients (awaiting review).