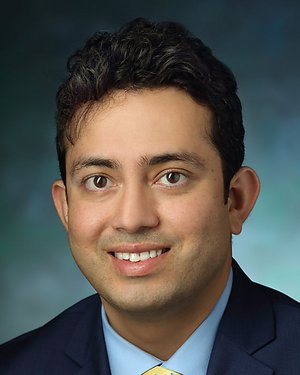 Dr. Deepesh Pandey is an Assistant Professor of anesthesiology and critical care medicine at the Johns Hopkins University School of Medicine.

Dr. Pandey received his B.A. from Minnesota State University. He earned his Ph.D. from the Augusta University.

The guiding theme of my graduate and postdoctoral research work has been to reveal mechanisms that govern vascular endothelial function in the setting of oxidative injury. My graduate research focused mainly on identifying and characterizing splice variants of a calcium-dependent isoform of NADPH oxidase, Nox5 - a major producer of injurious oxidant species in endothelial cells which is uniquely expressed in humans. I also elucidated two specific post–translational mechanisms that regulate NADPH oxidase-dependent production of harmful oxidant species in blood vessel endothelium: Phosphorylation by the MAPK / CAMKII pathway, and SUMOylation.

My initial postdoctoral project at Johns Hopkins provided an opportunity to continue my interest in endothelial biology by studying the role of Arginase 2 in the regulation of cardiac ischemia and reperfusion injury. I was awarded an American Heart Association Postdoctoral fellowship to support this work. I studied the short- and long-term regulation of Arginase 2, a reciprocal regulator of endothelial nitric oxide synthase in endothelial cells. Using animal models of atherosclerosis, ex-vivo vascular ring reactivity experiments, and molecular, cellular and biochemical approaches, I have demonstrated that short-term activation of arginase in aortic intima occurs via post-translational modification and subcellular translocation of pre-existing pools of Arg2 from mitochondria to the cytosol. Furthermore, I have shown that long-term activation of Arg2 involves transcriptional regulation by histone deacetylase 2, and I have recently demonstrated that HDAC2 levels are regulated by a newly appreciated post-translational mechanism. HDAC2 is covalently modified by NEDD8, and this promotes its clearance via proteasomal degradation.

Further, I demonstrated that endothelial dysfunction caused by OxLDL may be reversed by an inhibitor of Neddylation. I was awarded American Heart Association Scientist Development Grant to advance my research and to prepare me for competition for R01 level funding. In order to further understand the role of HDAC2 in vascular function, I recently produced transgenic mice that express abundant human HDAC2, exclusively in the endothelium. I have demonstrated that these mice exhibit improved endothelial function, and that they are protected from injurious endothelial stimuli including oxidized lipoproteins. The production of this new transgenic mouse line has laid the groundwork for exciting new translational investigations. My long-term goal is to discover and understand novel epigenetic and other mechanisms that regulate endothelial function and dysfunction, in order to identify novel targets for the enhancement and protection of endothelial function, and thereby thwart atherogenesis.