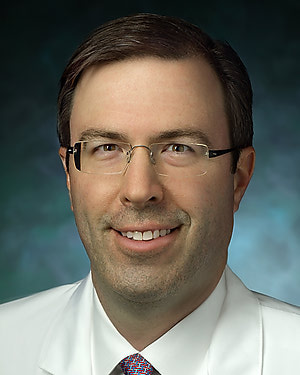 Dr. Brian Matlaga is a Professor of Urology at the Johns Hopkins University School of Medicine and also serves as the Director of the Gerald and Helen Stephens Center for Stone Disease at the James Buchanan Brady Urological Institute.  Dr. Matlaga received his undergraduate degree from Dartmouth College, and his Medical Degree and a Master of Public Health degree from Tulane University.  He then completed his internship in surgery and residency in urology at Wake Forest University; his subsequent fellowship at Indiana University was supported by an American Foundation for Urologic Disease Research Scholarship.

Dr. Matlaga is an internationally recognized expert in the medical and surgical management of patients with urinary stone disease.  This expertise is built on his academic investigations of the pathophysiology and epidemiology of stone formation, as well as into the advancement of minimally invasive surgical techniques.  A frequent contributor to the medical press, Dr. Matlaga’s research has received both national and international awards; in 2014, he was the recipient of the Endourological Society’s Arthur D. Smith Endourology Lectureship, which was given in recognition of accomplishments in the first ten years of his career.

Dr. Matlaga is an independently funded investigator, and presently is the Principal Investigator for the National Institute of Diabetes and Digestive and Kidney Diseases (NIDDK) Urologic Diseases in America project.  Dr. Matlaga sits on numerous editorial boards as well as advisory committees and guidelines panels for the American Urological Association, the American Board of Urology, the Endourological Society, and the National Institutes of Health.  He recently served as Vice Chair of the American Urological Association’s Surgical Management of Stones Guidelines and has also served as Task Force Chair for the Examination Committee of the American Board of Urology. He presently serves on the Board of Directors for the Society of Academic Urologists as well as the Endourological Society.

Dr. Matlaga’s research aims to better understand the pathophysiology and epidemiology of urinary stones and to advance the use of minimally invasive surgical techniques in treating them.