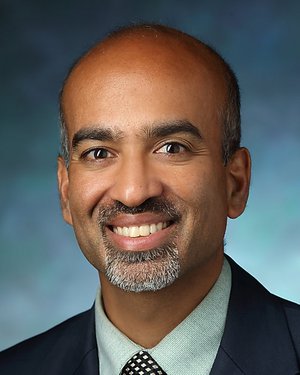 Understanding how infection and inflammation damage the nervous system; How to promote repair of the damaged nervous system ...read more

Dr. Arun Venkatesan serves as Director of the Johns Hopkins Encephalitis Center, where he directs clinical activities and research.  At the center he has developed a multidisciplinary program devoted to optimizing diagnosis and management of patients with infectious and autoimmune encephalitis and understanding mechanisms of disease in order to develop more effective treatments.  He also plays an active role in the Johns Hopkins Multiple Sclerosis and Transverse Myelitis Centers.

He received his undergraduate degree in biomedical engineering from the University of California, Berkeley in 1994, followed by a Ph.D. in microbiology and immunology and an M.D. from the University of California, Los Angeles.  He completed his residency in neurology and fellowship in neuroinfectious and neuroinflammatory diseases at Johns Hopkins, after which he was appointed to the faculty in the department of neurology in 2007.  His laboratory research focuses on defining causes and mechanisms of central nervous system injury in the setting of infection and neuroinflammation, with a goal towards developing protective and regenerative strategies.  He has received funding from the National Institutes of Health, Howard Hughes Medical Institute, National Multiple Sclerosis Society, and Maryland Stem Cell Research Fund.

Dr. Venkatesan’s research interests focus on how infectious and immunologic diseases affect the brain. In particular, he is interested in understanding how HIV infection and co-morbid conditions associated with HIV (i.e. substance abuse) affect a process called neurogenesis, the formation of new neurons in the adult brain. Neurogenesis may play an important role in maintaining normal cognitive function, and disruption of neurogenesis by HIV infection, inflammation, or substance abuse may have significant clinical consequences. Through the use of both cell culture and animal model systems, Dr. Venkatesan has found that both HIV and drugs of abuse impair neurogenesis in the hippocampus, an area of the brain important for learning and memory. He is currently focused on developing therapies that restore neurogenesis during infection or inflammation. He is exploring both drug-based approaches and cell-based approaches (transplantation of cells into the brain) with the eventual goal of preventing or reversing cognitive dysfunction in patients with HIV infection, substance abuse, or neuroinflammatory disorders.