William Stewart Halsted, The Johns Hopkins Hospital’s first surgeon in chief, is widely credited as the first to develop and introduce rubber surgical gloves in the United States. That was in 1894, five years after the institution opened.

Now, in an effort to make medical care safer for patients and health care workers, The Johns 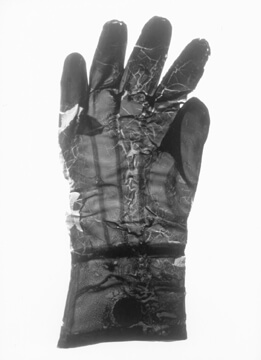 Hopkins Hospital has become the first major medical institution to become “latex safe” by ending all use of latex gloves and almost all medical latex products.

“Latex hospital gloves were invented here, so it’s only fitting that Johns Hopkins takes the initiative to promoting alternatives,” says Johns Hopkins anesthesiologist Robert H. Brown, M.D., M.P.H., the chair of the John Hopkins Hospital Latex Task Force and one of many Hopkins faculty and staff members who have contributed to making the hospital latex-safe.

It was at Hopkins that immunologists Robert Hamilton, Ph.D., and Franklin Adkinson, M.D., conducted early key research related to the problems of natural rubber latex as an allergen. Furthermore, Brown points out, the nurses and other frontline hospital workers have been instrumental in implementing the latex-safe policy and educating the staff. Studies show that roughly 6 percent of the general population and up to 15 percent of health care works are allergic to latex, with the higher rate among medical personnel due to longer periods of contact with natural rubber. In addition to surgical gloves, latex is used in numerous medical devices such as tourniquets, blood pressure cuffs and stethoscope tubes. The anaphylactic reactions, similar to those caused by foods such as peanuts or by bee sting allergies, can include a drop in blood pressure, an irregular heartbeat, swelling in the hands and feet and constriction of the airways. In extreme cases, anaphylactic shock, which can occur minutes after the exposure, can lead to death.

Allergic reactions generally result from exposure to natural proteins, in this case proteins specific to natural rubber latex, a product from rubber trees.

Currently available replacement gloves are made of one of three synthetic products -- neoprene, polyisoprene or vinyl, none of which contain natural plant proteins.

Johns Hopkins is now using sterile neoprene and polyisoprene gloves in the operating room because they have a more sensitive feel.

“The sensitivity and fit of the new gloves are the same as what you get with latex gloves,” says Julie Freischlag, M.D., professor and chair of surgery. “Unless someone told you, you wouldn’t know the difference. The only down side is that they are a little more expensive.”

Dr. Brown says the risk of developing an allergic reaction to latex is higher if contact is made with broken skin or mucous membranes - such as when hands are raw from multiple scrubbings or when health care workers breathe in the powder that makes the gloves easier to put on.  Patients for whom latex medical products are commonly used for treatment - such as children with conditions such as bladder exstrophy or spinal bifida - can have as high as an 80 percent chance of developing an allergic reaction to the natural rubber latex.

Halsted is reported to have developed the latex glove to protect the hands of his scrub nurse from the harsh antiseptics in widespread use as disinfectants. By 1966, disposable latex gloves were the norm in operating rooms nationwide, and in the 1980s, the need for “universal precautions,” prompted by the AIDS epidemic, increased their use outside the operating room and among health care workers everywhere. As glove use proliferated, so did the rate of allergic reactions, and by the mid-1990s, latex allergies were considered a major health issue. Dr. Brown says he prefers the term “latex safe” to “latex free” because removing all sources of natural rubber remains a bit of a challenge.

“We are still searching the hospital for the few remaining medical latex products that we might have overlooked, although we can safely say that all major latex products that are a clear risk to health care workers and patients have been eliminated,” he says.

Podcast:  Robert Brown and Julie Frieschlag talk about the transition to latex-free surgical gloves and a latex-safe environment at Johns Hopkins http://www.hopkinsmedicine.org/mediaII/Podcasts/latex.html