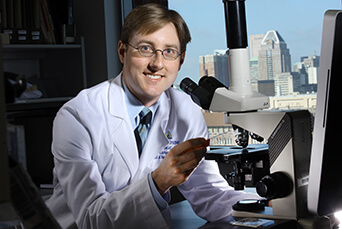 He was outstanding. He made me feel so comfortable. I wasn't just another patient to him.

Jessica noticed that her voice was hoarse and raspy, and having had laryngitis before, she figured the symptoms would fade with time. After they persisted for three weeks, she saw an otolaryngologist (ENT) who diagnosed her with recurrent respiratory papillomatosis.

Jessica’s condition, known as RRP, is a human papilloma virus (HPV) infection that causes wart-like growths on the vocal cords. These benign growths regrow even after they are surgically removed.

Her doctor performed four surgeries, but her voice was still rough and raspy. She went for a second opinion. Sixteen surgeries later, Jessica’s symptoms persisted - her voice never fully returned between surgeries and the flare-ups happened too often.

While on a Facebook page for people with recurrent respiratory papillomatosis, Jessica read about a KTP laser surgical option from Dr. Simon Best at the Johns Hopkins Voice Center. It was time for a third opinion.

By the time she saw Dr. Best, her condition had started to cause breathing difficulties, and her voice was nothing more than a whisper. She was eager to try any new treatment plan.

Given the recurring nature of the disease, Jessica knew that there was no permanent solution. Her goal was to be able to live her life normally between procedures and decrease the number of treatments as they began to wear on her body. The normally outgoing woman became less social. Without her usual voice, she was unable to communicate well with her husband and friends and was tired of the constant questions asking her if she was sick or what was wrong with her voice.

Dr. Best explained to Jessica that he takes a unique surgical approach to treating RRP. Many doctors are cautious in removing the papilloma because imprecise surgery will damage the vocal cords. Although this approach will likely cause no permanent vocal damage, the diseased tissue that is left behind will cause rapid regrowth and little improvement in vocal quality between surgeries.  By using the KTP laser to precisely remove papilloma, Dr. Best has greater control to achieve better results. He compares his method to mowing the lawn.

“It’s like cutting the grass as short as you can without getting into the dirt” he says about his high-precision surgical approach. “You completely remove the papilloma without injuring the vocal cord. The laser allows this precise control to spare the delicate vocal cord tissue underneath the papilloma”.

Jessica had seven laser surgeries with Dr. Best in the operating room and two in-office procedures.  After each operation, Jessica’s voice came back stronger and stronger, better than it had been in more than two years.

“He got the disease under control,” Jessica says. “It’s a 100 percent difference. My voice is back now.”

Jessica’s condition isn’t curable, but with her new treatment plan, it is manageable. She’ll continue to need occasional surgeries or in-office procedures, though much less often than before. On a day-to-day basis, however, she’ll enjoy a healthy, normal voice.

“He was outstanding,” Jessica said of Dr. Best. “He made me feel so comfortable. He made me feel like he actually cared. I wasn’t just another patient to him.”

“I’m very invested in how my patients do,” Best says. “RRP is rare disease, so these patients need someone who understands everything they go through and looks out for them”.

The positive results and her good relationship with Dr. Best kept her coming back to Johns Hopkins despite the four-hour roundtrip drive from her Virginia home to Baltimore.

“I’d always heard amazing things about Johns Hopkins, and I needed the best doctor,” Jessica says. “[The long drive] might be a hassle, but definitely worth it.”