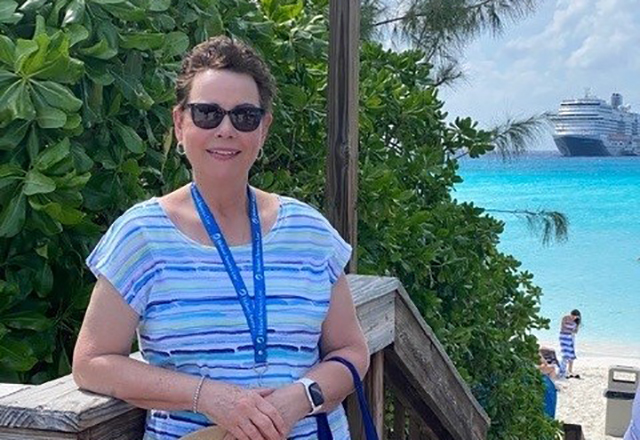 Hetty, after her surgery, enjoying a tropical cruise

Hetty Devroom, 67, knows a lot about medicine and health. Now retired and living in Silver Spring, Maryland, she worked 31 years as a clinical nurse and researcher at the National Institutes of Health, headquartered in Bethesda, Maryland.

She lives with high cholesterol and gets her blood checked regularly. Over time, Hetty’s blood tests showed her calcium levels were creeping upward. When her doctor suggested a closer look, Hetty agreed. She was not very concerned — she felt fine.

Abnormal calcium levels can mean an issue with a parathyroid gland

After doing further tests, Hetty’s doctor recommended that she see an endocrinologist, who said she might have a problem with one of her parathyroid glands.

“That threw me for a loop,” Hetty says.

The parathyroid glands are four very small glands — each about the size of a grain of rice — located behind the thyroid gland, which is in the front of the neck. They secrete a hormone that, among other functions, regulates the amount of calcium circulating through the body.

Sometimes, due to a tumor or another cause, one or more of the parathyroid glands overproduce this hormone, a condition called hyperparathyroidism that can elevate calcium levels. Too much calcium can cause pain in the bones and joints, osteoporosis (brittle bones), kidney stones and other problems.

Hetty says she didn’t notice any symptoms. “My abnormal blood tests were the only clue that something was wrong,” she says.

Discovery of a Parathyroid Tumor

These scans revealed a 1-centimeter tumor, called an adenoma, affecting one of Hetty’s parathyroid glands. The endocrinologist said the gland would need to be removed surgically, and recommended that Hetty consult Johns Hopkins head and neck surgeon and parathyroid specialist Ralph Tufano, M.D., M.B.A.

Hetty’s home is less than an hour from Tufano’s clinic. “I didn't have any trouble getting to Johns Hopkins,” she says. During her first visit, she got more tests, and then she was ready to meet with the surgeon.

“Hyperparathyroidism is not a common problem,” says Tufano. “It is more likely to affect people in their 50s, 60s and 70s, and women more frequently than men. When younger people have hyperparathyroidism, we want to treat them promptly to improve their quality of life.”

Hetty, traveling and exploring before her surgery

Meeting with the Parathyroid Specialist

“Dr. Tufano seemed confident he could help me, and he got right to the point,” Hetty says.

“Ms. Devroom’s parathyroid was enlarged,” Tufano says. “Normally, they are each 2 to 3 millimeters, and hers was larger. The tumor, or enlargement, on the parathyroid gland was benign, but it was causing it to overproduce parathyroid hormone.”

Although Hetty felt OK, there were good reasons not to wait to treat the condition. Tufano explains: “Over time, this overproduction of hormone could cause more calcium to be leeched out of Ms. Devroom’s bones, resulting in osteoporosis, kidney stones, impaired kidney function, even coronary artery disease or peripheral artery disease.”

He adds that surplus calcium due to hyperparathyroidism can cause other symptoms, such as fatigue, a depressed mood and cognitive issues, which can slowly get worse over time.

Patients often note improvement right away after having the gland removed, Tufano says. “The patients with these symptoms really feel more clarity and energy just days after surgery,” he says.

“Some patients who come in with hyperparathyroidism are nervous about having an incision or scar,” says Tufano.

“Even though the incision is relatively small, some people heal differently, and the neck is not something you can readily hide. Trepidation about surgery that might leave a visible scar can even cause some patients to delay getting their hyperparathyroidism treated.”

Some of that concern is justified. Tufano’s team conducted research, using visual tracking devices, that showed that when meeting someone who has a scar on their neck from thyroid or parathyroid surgery, a person’s eyes tend to linger on the scar rather than on the face.

Together, Hetty and Tufano discussed options for her treatment, including transoral parathyroidectomy, a scarless option in which the surgeon gains access to the parathyroid gland from underneath the lower lip.

“He showed me the anatomy chart and explained how they’d get there,” she says. “We covered all the differences in risk, comparing going underneath the lower lip versus through the neck.”

Tufano remembers that Hetty was well informed and asked excellent questions. “We were talking in a way that was very frank,” he says. “I explained that the scarless approach was a relatively new procedure, and we talked about the value to her in avoiding an incision.”

Hetty says she was intrigued by the transoral approach. “I liked the idea of not having a visible scar,” she says.

Hetty and Tufano also discussed her lifestyle, including her pre-COVID-19 pandemic passion for taking ocean cruises to the tropics, soaking up the warm sun and wearing stylish summer clothes.

Tufano advised her that if they decided on the traditional, through-the-neck surgical approach, sun exposure could make scarring more obvious. “Ms. Devroom would have to diligently avoid sun exposure for the first six months to one year to avoid healing with a more conspicuous scar,” he says.

Hetty opted for the transoral parathyroidectomy. “No question that it was my decision,” she says, “which was reassuring.” 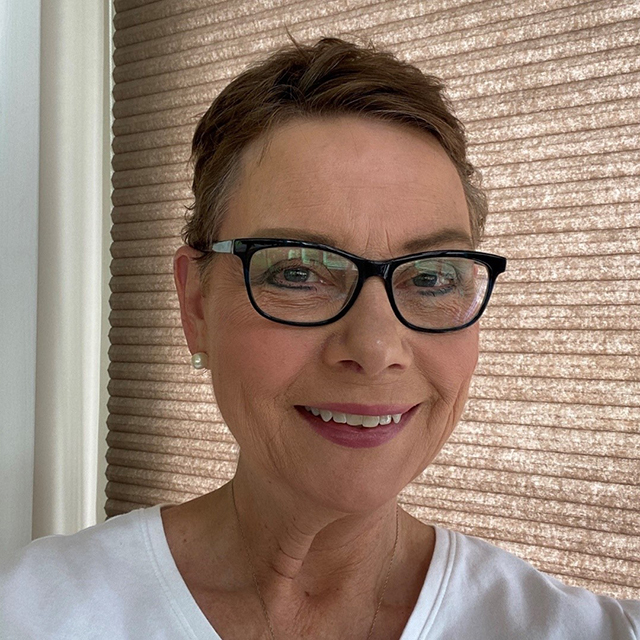 “I liked the idea of not having a visible scar.”

Feb. 25, 2019, was the day for the surgery, which was scheduled for 7:30 a.m. Hetty and a friend drove to The Johns Hopkins Hospital in the dark of early morning. “I was glad there was no snow,” she laughs.

While waiting for Tufano in the preoperative area, Hetty says she was a bit nervous. But as the team wheeled her into the operating room, right on time, her career as a nurse researcher gave her perspective. “I understood the problem, and that this was the solution,” she says.

Hetty received general anesthesia, so she was asleep during the procedure. “I woke up, thinking it had to be sometime in the afternoon, but it was only about 10:30 a.m.,” she says.

Though the vast majority of people can go home the same day as surgery, Tufano carefully assesses each patient after the procedure and, if necessary, keeps them overnight for observation. Such occurrences, he says, are rare.

Hetty came through the procedure just fine. “I saw Dr. Tufano, and he said everything went great. That was it! My friend drove me home and I was resting in my own house with a compression dressing under my chin by 1 p.m.”

“I can tell you that the recovery is very speedy,” Hetty says. “You can be up and around within a day or two. There was some bruising and a little bit of numbness. I just pulled up a turtleneck to go to the store while the bruises were visible. At about the two-week mark, I was back to normal.”

She followed up with Tufano and his team five weeks and then six months after the surgery, and she says she appreciated the support of the nurses and residents at the clinic.

Hetty, whose calcium levels have returned to normal, recommends that anyone facing parathyroid surgery do some homework. “Go to the best surgeon you can find,” she says. “You want someone who has performed a lot of these surgeries, like Dr. Tufano. And pick a good hospital.

“With the right information, you can make the right decision for yourself.”

Hyperparathyroidism most commonly affects people over age 60, and women are more likely to have the condition than men. When a tumor or other condition causes a parathyroid gland to produce too much parathyroid hormone, it can create an imbalance of calcium in the body. Treatment can include medication or surgery to remove the parathyroid gland.

Part of the Johns Hopkins Department of Otolaryngology–Head and Neck Surgery, the Multidisciplinary Parathyroid Clinic’s experts in endocrinology and head and neck endocrine surgery provide a balanced approach to treating parathyroid gland disorders.