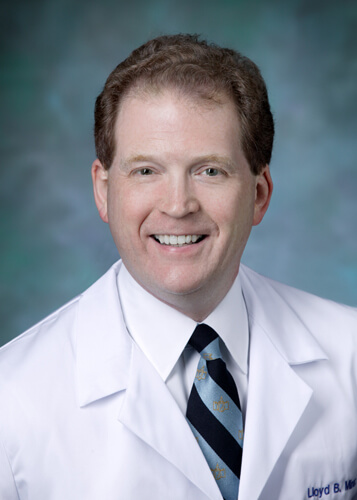 Lloyd B. Minor, M.D., who joined Hopkins in 1993 as an assistant professor, had been director of the department’s Laboratory of Vestibular Neurophysiology, working to advance understanding of how the body perceives head motion and maintains balance.

He also was professor of otolaryngology–head and neck surgery, of biomedical engineering and of neuroscience, and director of the otology and neurotology fellowship training program. Under his leadership, the research program grew from two staff members to 13 and now brings in more than $800,000 per year in grant support. On the clinical side, he and his colleagues are involved in more than 2,000 patient visits, 1,000 vestibular tests and 200 procedures per year.

In 1998, Minor and his colleagues linked tiny perforations in skull bones to a rare disorder, called superior canal dehiscence syndrome, in which loud noises can suddenly cause dizziness. After making the discovery by studying abnormal eye movements in these patients caused by loud noises, he devised a surgical procedure to correct the anatomical problem.

He also is known for treatment of Meniere’s disease, a syndrome involving dizziness, hearing loss, and ringing or pressure in the ears. Using gentamicin, an antibiotic that shuts down key cells in the balance system, Minor and his colleagues disable the balance system in one ear. The drug, given by injection into the ear, has proven effective in 90 percent of cases, usually with little or no hearing loss.

Born in Little Rock, Ark., Dr. Minor received his bachelor’s degree in biology from Brown University in 1979 and his medical degree from Brown in 1982. He completed his two-year core surgical residency at Duke University, followed by a four-year postdoctoral research fellowship in vestibular physiology and a residency in otolaryngology – head and neck surgery at the University of Chicago. He then was a clinical fellow at The Otology Group and The EAR Foundation in Nashville, Tenn.

Dr. Minor is currently the dean of Stanford University School of Medicine and was previously the provost and senior vice president for academic affairs of The Johns Hopkins University.