College athlete Michael Perry was a young and healthy offensive lineman until he was knocked over on his elbow after practice one day. Michael immediately knew something was wrong since his elbow was radiating with pain. A Johns Hopkins elbow specialist diagnosed Michael and discovered how serious his injury was. He had severe elbow ligament and muscle damage, including a rupture of the brachialis muscle and a full tear of the ulnar collateral ligament (UCL) — crucial tissues that control the function of an elbow. The specialist recommended UCL reconstruction surgery, which they performed by using some of Michael’s own tendons. This gave the young athlete essentially the same elbow anatomy he had before his injury. Only four weeks after his elbow surgery, Michael regained his range of motion and looks forward to getting back to playing sports.

Learn more about our team of shoulder and elbow experts. 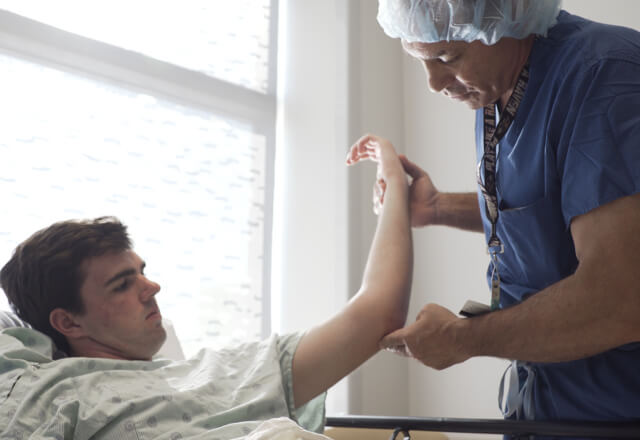 About Ulnar Collateral Ligament Injuries of the Elbow

The UCL complex is located on the inside of the elbow, and is attached on one side to the bone of the upper arm and on the other to a bone in the forearm. The UCL can be injured in several different ways. Most commonly, there is a gradual onset of elbow pain due to repetitive stresses, such as from participating in overhead or throwing sports. However, a traumatic UCL injury is also possible, which is what happened to Michael when he was knocked over on his elbow after practice one day.