Austin Homan, a young athlete from Schuylkill Haven, Pennsylvania, started playing football at 8 years old and quickly developed a love for the game. But just two years into the sport, an opponent collided helmet-first with Austin, right into the side of his knee.

"It was every mother's nightmare," says Stephanie Homan, Austin's mother. "He's always been a big kid and was usually quick to bounce back from a fall. So when he didn't get up, I knew something was wrong."

Austin, who was just 10 years old at the time, was in pain and unable to put any weight on his leg due to a torn anterior cruciate ligament (ACL). Knowing what sports meant to Austin, Stephanie quickly sought out treatment options that would help get him back to the activities he loved. Austin also played baseball and basketball, competing on both local and traveling teams.

The first doctor Stephanie spoke to referred her to a surgeon in Reading, Pennsylvania, who was reluctant to operate on Austin because of his age. The surgeon suggested Austin give up sports for a few years or else seek the help of another surgeon who might be willing to operate on him and repair his torn ACL.

Austin's ACL injury was close to his growth plate, which is an area of cartilage located near the end of the long bones in children. After a child has finished growing (around age 16 for boys and age 14 for girls), growth plates close and no longer create new bone. When children are still growing, damage to the growth plate could result in a limb that is crooked or unequal in length compared to its opposite limb. For that reason, many surgeons are hesitant to operate next to the growth plate if it is still open. But without knee ligament repair surgery, Austin's risk of arthritis would increase and he might never play football again.

Stephanie was determined to find help for her son and extended her search to Philadelphia, where she found a surgeon who suggested she contact the pediatric orthopaedics specialists at The Johns Hopkins Hospital in Baltimore.

"We knew there were risks with having Austin operated on since the injury was so close to the growth plate, but we were very impressed by our surgeon and confident in moving forward with surgery."

"While the traditional course of action in a case like Austin's was to delay surgery, now there are new technologies and new techniques that offer young athletes an option for safer ACL reconstruction and less risk of growth plate disturbances and complications that can arise from them," explains our surgeon. "And in Austin's case, this was the best treatment option available to get him back to his active lifestyle."

For other parents of young athletes who have sustained a knee injury like Austin’s, Stephanie offers the following advice: “First, take a deep breath and weigh your options. You have to decide what your best one is for you and your child. And remember, it’s not bad to go big and expand your search to surrounding cities and states if you will get the best care there.”

Austin's ACL surgery was a success, and the next day he began physical therapy to start rebuilding his strength. Today he is fully rehabilitated and back to the sports he loves.

Our pediatric orthopaedic surgeons specialize in treating a variety of conditions through treatments catered to child and teenage patients.

Learn more about our team of pediatric experts. 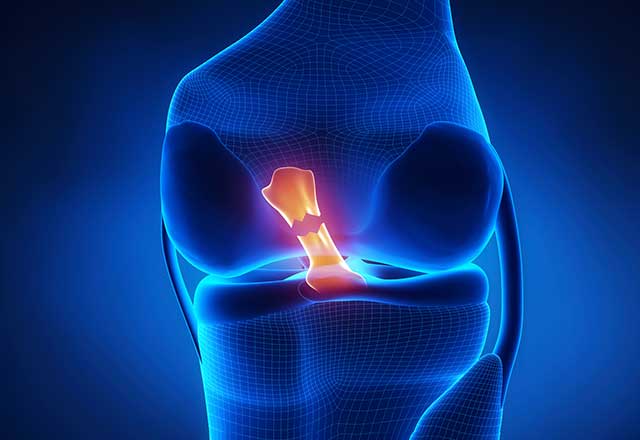 An ACL injury is the tearing of the anterior cruciate ligament, one of the major ligaments in the knee, which can result in swelling, inability to bear weight on the leg and instability of the knee.