Pastor Kleyton Feitosa learned he would lose his leg to recurring cancer. An osseointegration procedure, his own determination and a dedicated team of experts across several specialties supported Kleyton so he could stand tall. 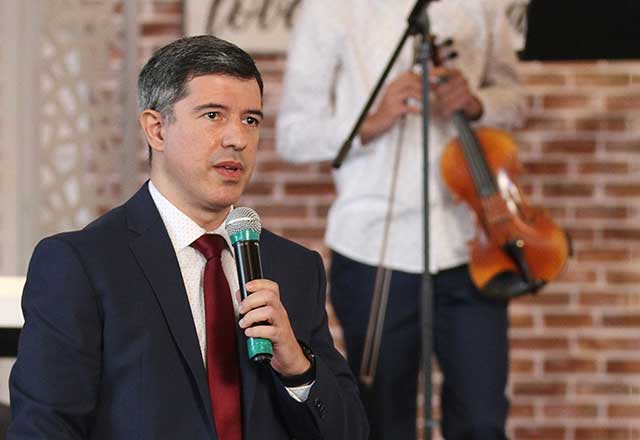 On a beautiful spring day in 2018, Pastor Kleyton Feitosa was tossing the football around with his two sons in Maryland. They were having a great time, laughing and taking pictures.

All three of them wanted to make sure they remembered this bittersweet day, since they couldn’t stop time and prevent what lay ahead: The next day, Kleyton was scheduled to have his leg amputated.

Treating a Cancer That Kept Coming Back

Kleyton had been living with myxoid liposarcoma, a soft tissue cancer in his thigh that was diagnosed in 2011 when he was 36. Despite radiation treatment, over the years the cancer had recurred and advanced, and by 2020, he was out of options for saving his leg.

Kleyton’s orthopaedic oncologist, Carol Morris, M.D., had been treating him for years. She says, “Sarcoma is an uncommon tumor, which can strike any age group, and behave very aggressively. It was heartbreaking for the entire team that we could not save Pastor Feitosa’s leg.”

Kleyton says even with his family’s support, facing amputation was tough. “You have to be mentally and spiritually prepared to lose a limb. You must read about it, talk to people and process it. I like to plan my life ahead when I can, and because the amputation was due to cancer, I had time to think and prepare. It’s not like someone who is in a car accident and awakens from emergency surgery with a leg gone.

A long and complex recovery was ahead of him, but Kleyton had a team of experts at his side. In addition to Morris, an orthopaedic oncologic surgeon, a physical medicine and rehabilitation specialist, a prosthesis designer and builder, a physical therapist, and many others would help Kleyton heal.

Conventional leg amputations leave the patient with a residual limb (stump), which involves the surgeon sealing off muscle, blood vessels, fat and nerves and carefully closing the skin. When appropriate, the surgeon creates a cufflike socket of skin and soft tissue that can accommodate a prosthetic leg.

Normally, Morris says, when operating on a patient with an aggressive sarcoma so high on the leg, the team would likely perform a hip disarticulation, removing the leg at the hip joint, which would have made creating a socket impossible.

According to Kleyton’s doctor, Marlis Gonzalez-Fernandez, M.D., Ph.D., a specialist in physical medicine and rehabilitation, with a hip disarticulation Kleyton would have had to have a prosthesis that would go up to the hip and be held in place with straps. “Adapting to this kind of prosthesis would not have been impossible for a motivated patient like him, but very challenging, and the results would be limited,” she says.

Morris consulted with her colleague, orthopaedic oncologic surgeon Jonathan Forsberg, M.D., Ph.D., and discussed how they could leave another option open for Kleyton: osseointegration, or OI. The brand-new procedure would demand a lot from the patient, the surgeons, the physical medicine doctor and the rest of his care team. But it could provide Kleyton the chance to stand — and perhaps even walk — on his own.

Forsberg says, “Pastor Feitosa was facing an uphill battle because the tumor bed involved most of his femur. The amputation was done quite high in the thigh,” he says, “but osseointegration gave him a chance to be as functional as possible.” 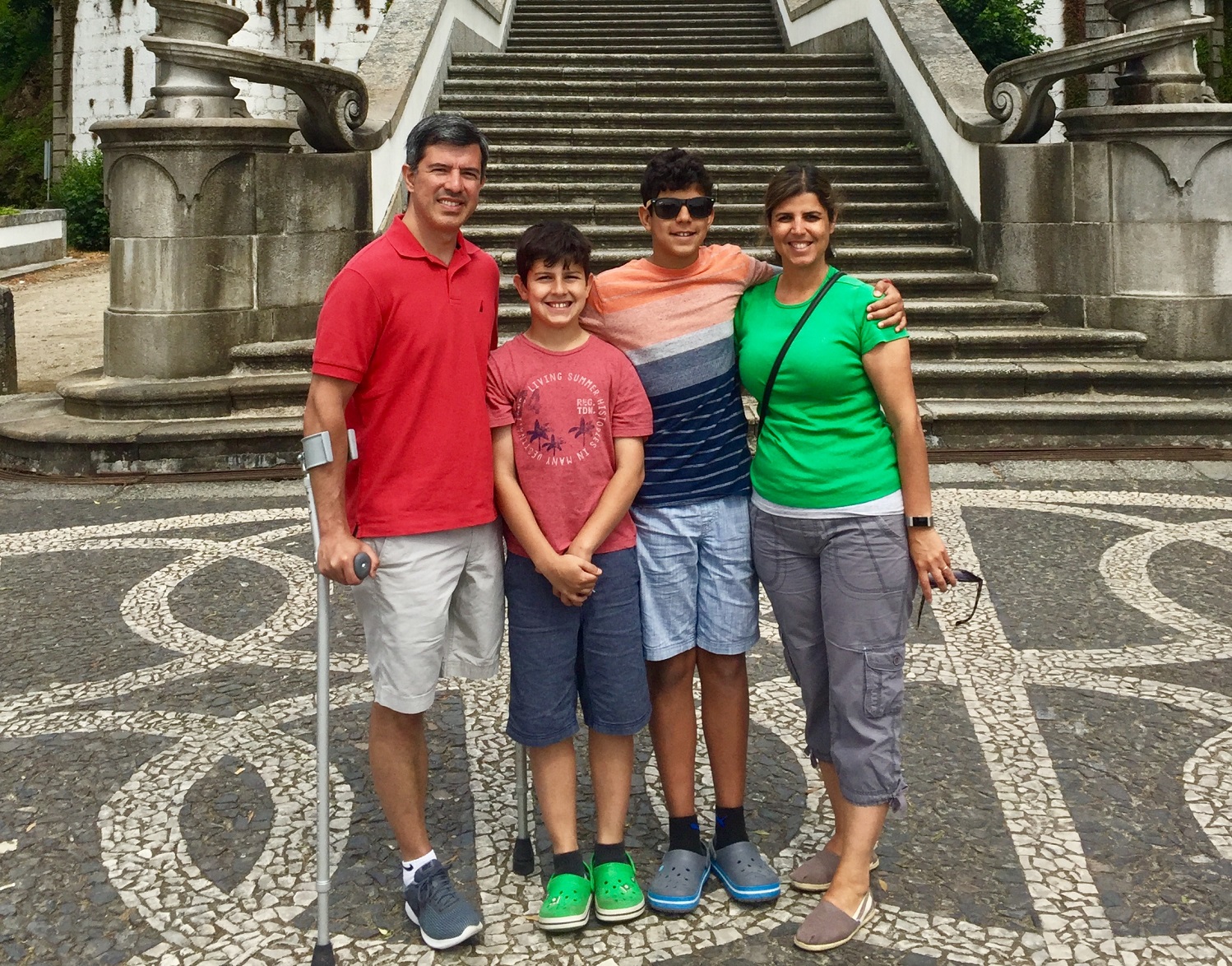 Kleyton, after his leg amputation and before his prosthesis, vacationing with his family

Osseointegration: An Approach That Offers Hope

Kleyton was among the first civilians to undergo OI. Originally developed in Sweden and used by Forsberg to help injured troops, osseointegration involves one or two surgeries.

For the two-step version, which Kleyton had, the first surgery implants a titanium post inside the remaining bone, supported by grafted bone tissue and held in place with a washer. The end of the post is covered with skin.

Three months later, the bone graft has taken hold, and the patient is ready for the second procedure. Surgeons uncover the implant, remove hardware and carefully tuck muscle and soft tissue around the area where the post emerges from the end of the bone. When finished, the end of the post protrudes through the skin, and can attach to the prosthesis.

Forsberg explains, “Though OI is on the cutting edge, it’s not for everyone. You need to be dedicated and patient. People who undergo the procedure require a lot of hands-on therapy and rehabilitation to avoid complications.”

Osseointegration takes a long time, and the COVID-19 pandemic caused delays for Kleyton. In January 2020, he underwent the first procedure. Because there was very little femur left for the surgical team to work with, the team used bone from Kleyton’s hip to create a foundation where they could seat the titanium rod in his femur.

Normally, the two-step OI procedure calls for a three-month wait between the first procedure and the second. But safety precautions and scheduling changes due to the pandemic made Kleyton wait six months. Once he had undergone the second surgery and recovered for six weeks, he was ready for the next stage: preparing for the prosthesis.

Gonzalez-Fernandez explains: “The first step is to start acclimating the implant to weight-bearing. When Dr. Forsberg told us Pastor Feitosa was ready, he started to slowly train until he built up enough tolerance to allow weight-bearing; then we could fit him with a prosthesis. Our team monitored his pain level and he proceeded slowly, increasing the weight every week.”

“I’ll never forget the feeling of letting go and realizing for the first time after surgery that I was standing.” –Kleyton Feitosa

Kleyton got his new leg the first week of November 2020.

Mark Hopkins created a unique prosthetic leg for Kleyton to accommodate the short piece of bone and compensated for its inward angle so the new leg would point straight down and bear Kleyton’s weight properly.

Hopkins says, “OI is a remarkable procedure, and its success takes a large, experienced multidisciplinary team and so much effort on the part of the patient.”

“[Kleyton] is smart and understands the process and the instructions. If anyone could make it work, he could,” he says.

A “Rehabilitation Superstar” After OI Surgery

“I had to learn how to walk again,” says Kleyton. “But as therapy continues, you can feel the prosthesis in your bones. You strengthen muscles and graduate to one crutch, then to a cane, which is where I am now.”

His physical therapist, Ed Lyons, was impressed with Kleyton’s drive. “Kleyton was a great patient, so highly motivated. I can’t say enough about what a phenomenal individual he is. Right when he started walking, he was scheduled to be honored at his church, and his goal was to wear long pants and stand for an hour at the ceremony to give his sermon. With that in mind, he did everything he was asked to do.”

“For me, OI is the closest thing to walking normally and being whole again,” says Kleyton. “I’ll never forget the feeling of letting go and realizing for the first time after surgery that I was standing. My crutches were on the side.

“Sockets can hurt. They don’t always fit. You don’t have any of that with OI. The prosthetic is easy to click on and take off. It gives you osteoperception: You feel the ground under your feet. I know if I’m walking on grass or asphalt. I can feel my leg extending.”

His advice to others considering OI: “Go for it, don’t be afraid. Choose the right surgeon and the right team. Follow the protocols. Don’t rush the process, listen to your body.”

Continued Support from the Team

“Kleyton Feitosa is amazing,” says Gonzalez-Fernandez. “I’m glad we could offer him everything we have. He’s an incredibly resilient, motivated person who wanted to get back to his vocation and everything he loves. He’s a superstar.”

Kleyton has already taken his first steps, and Forsberg is happy for his patient, who recently addressed his congregation while standing before them.

“I was delighted to see the videos of him walking unaided,” Forsberg says. “I respect him very much. He worked hard and had a lot of patience, and so did his rehabilitation team.”

Gonzalez-Fernandez stresses the importance of an experienced team who can coordinate care from the amputation to the final stages of rehabilitation. “As [Kleyton’s] rehab provider, I was glad to know the rest of the team who had worked with him. Very few, if any, places in the country have all the pieces,” she says.

Still, she says ultimately, it was Kleyton’s triumph. “With the right person and the right motivation, we can do incredible things.”

The Osseointegration Clinic at Johns Hopkins 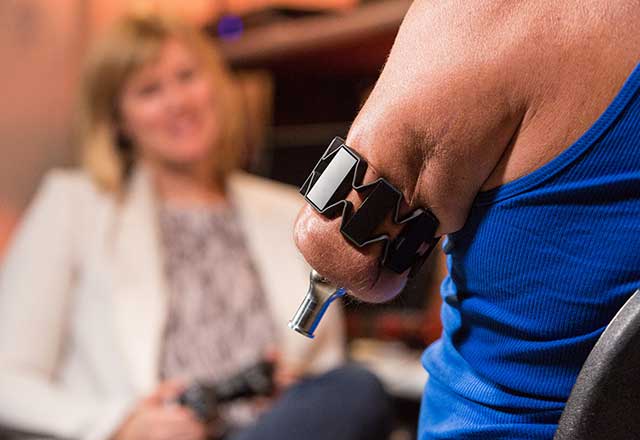 Osseointegration is a surgical procedure that offers better quality of life and improved function and mobility to people who have had an amputation. The Johns Hopkins Hospital, one of the few locations in the country that offers this innovative procedure, provides a full spectrum of care from evaluation to post-surgical rehabilitation.

Learn more about the Osseointegration Clinic