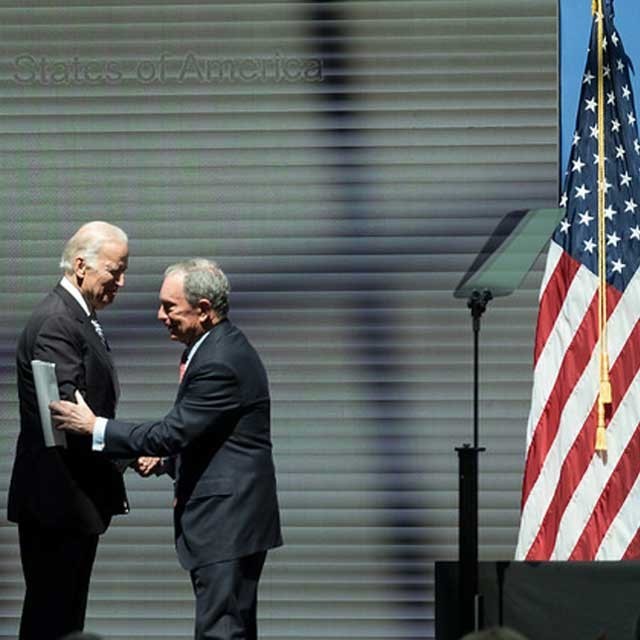 Vice President Joe Biden believes cancer research will progress more in the next 10 years than it has in the past 50, thanks to treatments that unleash the immune system to detect and attack cancer cells.

Biden spoke to researchers, medical students, government leaders and others during the dedication of the new Bloomberg~Kimmel Institute for Cancer Immunotherapy on Tuesday, March 29. It was founded with gifts of $50 million each from Michael R. Bloomberg and Sidney Kimmel, and $25 million from more than a dozen additional supporters.

Researchers say immunotherapy is one of the most promising avenues of cancer research today and a central element of the Obama administration’s new “moonshot” to end cancer. Currently the most rapidly advancing approach to cancer treatment, immunotherapy works by empowering each patient’s highly individual immune system.

The event took place before a standing-room-only crowd in the sunny second-floor atrium of the Anne and Mike Armstrong Medical Education Building on the Johns Hopkins medical campus.

“This institute is going to perfect new therapies and bring hope to millions of people,” Biden said. “I’m convinced, not only will we save millions of lives, we will re-instill in the American public the notion that anything is possible.”

Michael R. Bloomberg also spoke at the dedication. “Like the effort to put a human on the moon, ending cancer is a dream we have all held,” said Bloomberg, the philanthropist, entrepreneur and three-term mayor of New York City.

Kimmel, founder of Jones Apparel Group, spoke in a pre-recorded video. “I have always sought to invest in the best people at the best place — connecting promise to progress,” he said.

Ronald J. Daniels, president of Johns Hopkins University, shared the stage with Bloomberg and Biden and noted that the new institute makes it possible to “accelerate our efforts to end all forms of cancer.”

Medical students in their white coats stood on stairs flanking the room and often drew the praise and attention of speakers. After the event, Biden shook the students’ hands and posed with them for selfies.

Paul Rothman, dean and CEO of Johns Hopkins Medicine, began the program by praising the generosity of Bloomberg, Kimmel and other donors. “It’s a really critical time in cancer immunotherapies,” said Rothman, a molecular immunologist.

Sens. Barbara Mikulski and Ben Cardin attended, as did Gov. Larry Hogan, who said his own recent experience with cancer was “one of more than 20,000 Maryland cancer stories each year.”

The Bloomberg~Kimmel Institute for Cancer Immunotherapy, with Drew Pardoll as inaugural director, will further strengthen Johns Hopkins’ world-class program in cancer immunology. It will unite Johns Hopkins Kimmel Cancer Center experts with the immunology, genetics, microbiology and biomedical engineering experts throughout Johns Hopkins. The concentrated effort will involve more than 100 scientists and clinicians.

“We believe the focused and collaborative research made possible through the institute will advance immunotherapies to the point where the immune system will ultimately be able to beat 100 percent of cancers,” says Pardoll, a leading immunology researcher at Johns Hopkins. “The potential to control or cure even the most advanced, treatment-resistant cancers has been elusive until now.”

Success stories like David Gobin’s could become routine. In 2008, Gobin, a retired Baltimore City police officer, had already undergone surgeries, radiation and chemotherapy for lung cancer when Julie Brahmer, a Johns Hopkins immunotherapy researcher, recruited him for a clinical trial. His tumors receded and didn’t grow back. “I’m alive today because of immunotherapy,” he says.

While funds for the new institute will primarily support research, they also will be used to recruit additional scientists; provide greater infrastructure for engineering cellular products related to immunotherapy research; enhance partnerships with the private sector, including biotech and pharma; and invest in critical technology development, such as new ways to profile the immune response inside tumors.

“This is going to provide funds to really push the envelope, do things that will allow us to follow some leads that are maybe a little bit out of left field,” says Pardoll. One idea, he says, is developing a drink that changes the gut microbiome to allow for a stronger immune response to cancer.

“If we can turn our own immune systems against cancer, we have a chance of beating it,” says Paul Rothman, dean and CEO of Johns Hopkins Medicine. “We are grateful for these tremendous gifts which will help us accelerate the already rapid pace of discoveries in immunotherapy.”