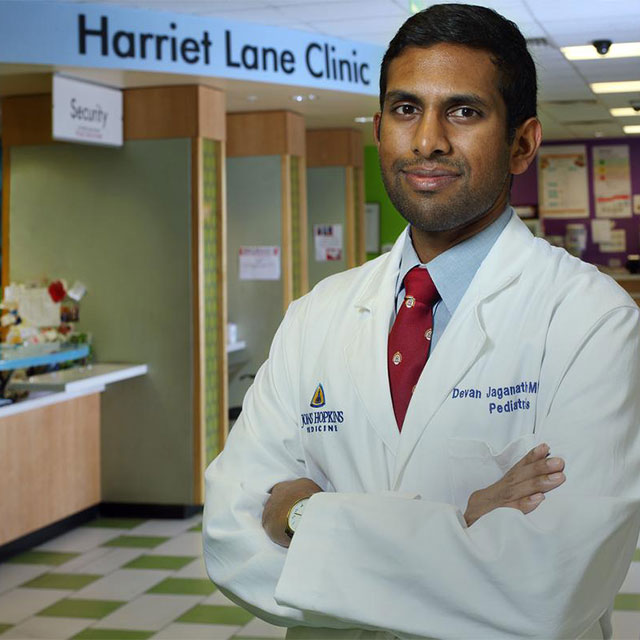 Devan Jaganath is a pediatrics resident at the Harriet Lane Clinic and a co-investigator on the project “Financial Futures for Families: A Novel Pediatric Primary Care Model to Address Childhood Poverty.”

Devan Jaganath, a pediatrics resident at the Harriet Lane Clinic, kept seeing the same problem appear in different guises: “Every day, we see patients come in with their health compromised by poverty in some way. Maybe it’s uncontrolled asthma, obesity or chronic anxiety. But living in poverty is a common factor.” The American Academy of Pediatrics also recognized this epidemic and recently released the first guidelines to direct pediatricians to tackle childhood poverty.

To help those patients and their caregivers, Jaganath, along with several colleagues, requested funding from the Johns Hopkins Primary Care Consortium for a project to tackle financial insecurity at its source. Entitled Financial Futures for Families: A Novel Pediatric Primary Care Model to Address Childhood Poverty, the project has received funding for the 2016–2017 academic year. Jaganath’s co-investigators are Barry Solomon, Megan Tschudy, Karl Johnson and Mariela Pinedo.

They envision using the grant money to create a sort of community center at the clinic, where patients’ parents can get help with filling out financial forms, budgeting and skills training. Jaganath and his colleagues will work closely with useful community services, such as financial coaching programs or free tax preparation services, that could help patients and their families too.

Four other projects received funding from the Primary Care Consortium for the 2016–2017 academic year:

Samantha Pitts, an internist and assistant professor of medicine who practices in the general internal medicine division at the Johns Hopkins Health Care and Surgery Center at Green Spring Station, was a co-investigator on a project funded for the 2015–2016 academic year that focused on increasing mammography screening rates for women ages 50 to 74. The group chose to focus on women in this age group because their mammography guidelines are more consistent than for other groups. A linchpin of their project was the quality improvement methodology Lean, which is useful for mapping current processes and determining better ones.

In the past, it was up to the physician alone to see if a patient had had a recent mammogram. The new process uses a team-based approach. The day before the appointment, the office administrator checks the patient’s records for a documented mammogram. If there isn’t one, the office administrator looks in CRISP, Maryland’s health information exchange, for one and scans it into Epic if found.

If the patient does not have a mammogram, the office administrator flags the patient’s file, and the medical assistants talk with the patient about scheduling one, as does the physician.

The project was effective. Following the intervention, the proportion of eligible women who were up to date on mammography when they came in for an office visit increased from 78 to 85 percent. The proportion who had mammography discussed with them during their visit rose from 45 to 75 percent.

“Prior to our intervention, it was not standard to check for mammography in a patient’s medical record during an urgent care visit,” says Pitts. “Now, when a patient comes in for any reason, we all ask about mammography.”

To build on their success, Pitts and her colleagues have worked with radiology to offer same-day mammography and are partnering with patients to identify any barriers to getting a mammogram.