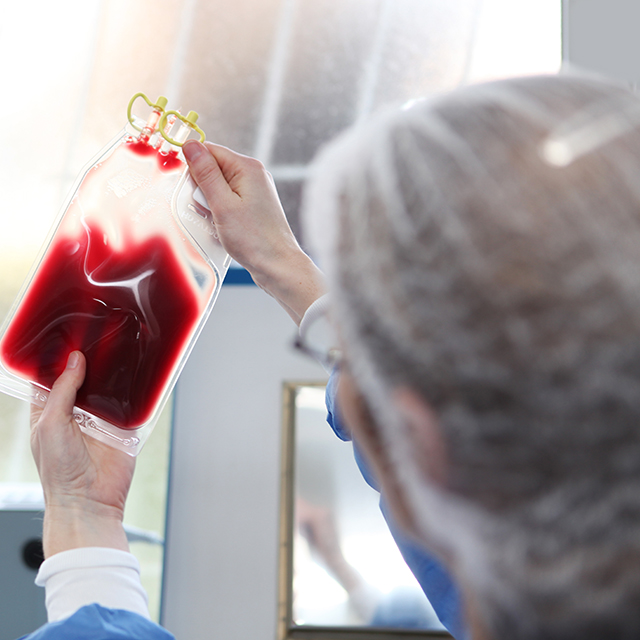 Nationwide, health care providers mislabel roughly one out of every 3,000 blood bank compatibility test samples. Patients who receive mislabeled blood are at risk for a potentially fatal hemolytic transfusion reaction.

Clinicians now must draw blood for compatibility testing twice, at least five minutes apart, for nonemergency patients who do not already have a blood type on file at a Johns Hopkins Medicine blood bank. In emergencies, group O red blood cells are provided.

“The second blood collection prompts the providers caring for the patient to complete the patient identification process a second time, adding a margin of safety against the possibility that the wrong patient’s label was applied to the tube of blood during the initial sample collection,” Gehrie says.

The rule, in effect for Johns Hopkins hospitals in Maryland and Washington since Oct. 1, applies to the roughly 5% of patients who do not have a blood bank history on record. “Each patient would need that second test only once in their lives,” Gehrie explains. Patients are not charged for the blood group test.

The practice does not apply to patients in immediate need of a transfusion, or to neonatal patients younger than 4 months — these patients only receive group O red blood cells.

“This safety initiative does not interfere with the release of emergency group O blood in any way and does not alter the process for activating the massive transfusion protocol,” Gehrie says.

Gehrie collaborated with Valerie Strockbine, transfusion safety officer for The Johns Hopkins Hospital, to develop the rule. Separately and together, they met with clinicians and patients over the course of 18 months to explain the plan, listen to objections and answer questions.

One of the main concerns they heard was that patients, particularly children, would object to having their blood drawn a second time.

“Understandably, there was initially a lot of pushback,” says Strockbine, who discussed the proposal with members of the Pediatric Family Advisory Council.

“But once they understood the problem and consequences, they understood it was for the best. They saw that the potential patient safety benefit far outweighed the discomfort and inconvenience.”

Gehrie notes that other large academic medical centers have similar rules. “Nobody wants to stick a patient more than they have to,” he says. “But nobody wants their patient to have a disastrous outcome because they got distracted and put the wrong label on the tube either. Our hope is that this new process enhances the confidence of both patients and providers regarding blood transfusion safety.”

A tips and tricks sheet for managing blood products and transfusions within the Epic electronic medical records system can be accessed with a JHED ID.