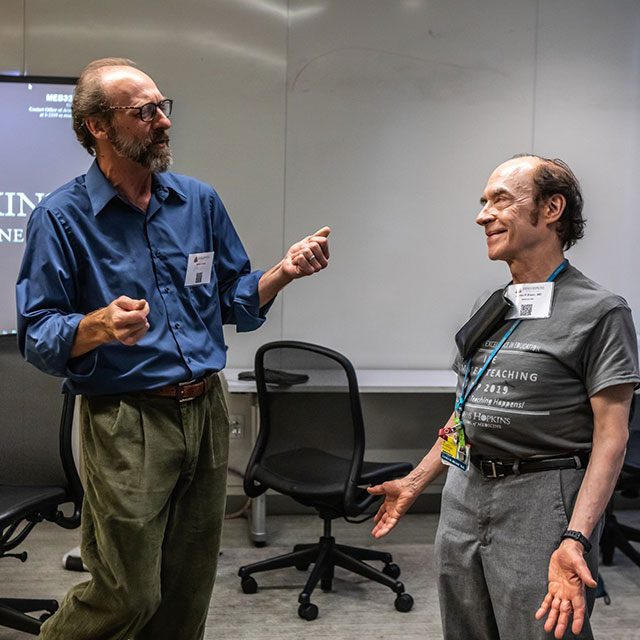 The assignment seemed more whimsical than serious: Tell a story about a boy who went into space, using improvisation techniques.

A half-dozen learners from among the 20 or so in the classroom volunteered. Standing in a row, each one in turn said a sentence starting with “yes, and,” making sure to build on what was said before.

When the group finished its tale, which had somehow morphed into an interspecies love story, participants talked about what they had learned.

It was the second and final day of the seventh annual Summer Teaching Camp, created by the Johns Hopkins Institute for Excellence in Education (IEE) to help medical educators.

“There are a lot of people who teach in medicine, but they haven’t gotten any training in how to do it,” says IEE director and professor of medicine Joseph Cofrancesco Jr., who co-leads the two-day continuing education event with Rachel Levine, associate dean for faculty educational development and associate professor of medicine.

“The camp is a way for people who are interested in being teachers to really learn about the craft and have some fun in the process,” Cofrancesco says.

The storytelling exercise was part of a 90-minute improv workshop, one of many events at the two-day camp, aimed at helping participants better understand how they listen, respond to unexpected situations and communicate through body language.

Reflecting on the storytelling exercise, Wolfe said she sometimes poses a question to a small group of learners and gets an answer that she doesn’t expect. Instead of dismissing the response as wrong, she says, the “yes, and” technique prompts her to listen and build on what she heard. “I ask how the learner got to that conclusion,” she said. “The answer is not as important as the clinical reasoning.”

10-Year Anniversary for the Institute for Excellence in Education

The IEE, founded 10 years ago, has four pillars: improving teaching; inspiring and supporting educational research, scholarship and innovation; valuing teachers; and creating a community of educators, says Cofrancesco. The summer camp is part of the “improving teaching” pillar.

The camp each year includes workshops on technology and on using feedback from learners to improve teaching, he says. This year, there was PowerPoint Karaoke, which requires volunteers to speak with apparent authority about nonsensical slides they have never seen before. The fun masks the serious purpose of teaching participants how to command a room and think quickly under pressure, says Cofrancesco.

In addition to improv, workshops this year included one on unintended stereotyping in the learning environment, and another on keeping groups of students engaged when they have different levels of knowledge.

The 2019 camp, held July 11 and 12 in the Armstrong Medical Education Building, drew about 75 participants, including some from Detroit and New York, as well as from Johns Hopkins All Children’s Hospital in St. Petersburg, Florida. About half were faculty; the rest were medical students, graduate students, residents or fellows, says Cofrancesco.

Teaching about education means that the instruction itself becomes part of the lesson. When organizers discuss the benefits of small-group learning, for example, they break the participants into small groups. When they talk about feedback, they make sure they’re giving it.

The first day began with Cofrancesco and Levine asking volunteers to describe their best and worst experiences as learners. The good: doctors who explain what they’re doing as they’re doing it, who put learners in charge while providing guidance, and who check in frequently to make sure students are getting the information they need.

The bad included instructors who made students feel anxious, discouraged questions or scheduled education sessions for times when learners were exhausted.

“We need to scan our learning environment to make sure learners are engaged,” Levine told the audience. “If people are less engaged, I’ll often give them a job, such as observing a patient for signs of discomfort.

“I try to create an environment where learners feel comfortable taking risks, because that’s where the learning happens.”

Visit the  Institute for Excellence in Education to learn about year-round educational opportunities and events, including lectures, scholarships, Grand Rounds and online resources.

And save the date for next year’s Summer Teaching Camp, scheduled for July 9 and 10, 2020. Registration opens in the spring.