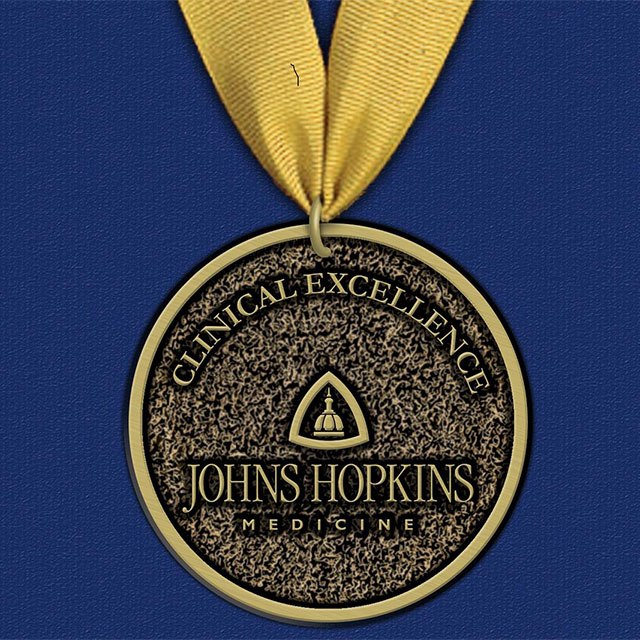 “Congratulations to all the nominees and winners of this year’s clinical awards. Each of you stands out among your peers for demonstrating consistent dedication to providing exemplary patient care,” said Rothman.

Winners, by Category and Entity

Physician of the Year is awarded to the physician who consistently achieves high standards in the practice of medicine and is looked upon as a role model by his or her peers. Here are the winners and links to short videos about them:

The Armstrong Award for Excellence in Quality and Safety is presented to the physician who partners with patients, families, colleagues and staff members to optimize patient outcomes and eliminate preventable harm. Here are the winners and links to their videos:

The award for Excellence in Service and Professionalism is presented to the physician who best promotes a culture that expects and rewards the delivery of patient- and family-centered care.

The Innovations in Clinical Care award is presented to the physician, nurse or team who demonstrates a visionary approach to problem-solving and performance improvement.

The Clinical Collaboration and Teamwork award is presented to the physician or team who engages colleagues in shared decision-making, fostering cooperation and open communication.

“These providers represent the very best in clinical excellence. They deliver patient care with great skill, compassion and innovation, and they are valued colleagues and mentors as well,” says Bill Baumgartner, senior vice president of the Office of Johns Hopkins Physicians.

Timeouts are a standard method to guard against making a critical mistake before, during or after surgery. But if the timeouts themselves aren’t standardized, are they as effective as they could be?

No, decided Marc Applestein, Bernard Marquis and Sharon Rossi, who together make up the Surgical Services Committee at Howard County General Hospital. They were honored with the Clinical Collaboration and Teamwork award for their committee’s work in standardizing timeouts and other processes and procedures. Applestein is head of surgery at the hospital, Marquis is head of anesthesiology and Rossi is senior director of perioperative services.

“Wrong-site, wrong-procedure or wrong-person surgery: We didn’t have a problem there, but we did an internal audit to ensure it stayed that way,” says Rossi. “What we found is that there were discrepancies in how timeouts were conducted in different areas of the hospital, and we recognized that those gaps had to be eliminated.”

Using Lean techniques, they organized a rapid improvement event in May 2015 that included anesthesia providers, surgeons, leadership, nursing and other caregivers. The interactive day, says Rossi, permitted everyone present to see firsthand where there were problems. “We were able to show that some types of timeouts caught more errors than others,” she says.

Says Applestein, “We then worked with the group to create the ideal, standard timeout to make the patient experience the safest it can be.” It was tested and refined several times before being adopted across the hospital.

Applestein emphasizes that the award is for the three of them and all the more valuable for that. “The award recognizes that success requires different caregivers with different areas of expertise coming together as a multidisciplinary team,” he says.

“We have a 24-hour hospital. What could we do to improve our 24-hour service?”

This was the broad question that Akshata Hopkins and the rest of the 24-Hour Care Progression Team at Johns Hopkins All Children’s Hospital considered. Discharge a child at 1 a.m. if that child is ready to go? For some families, such a late-night discharge versus discharge the next morning makes a real difference in terms of cost and convenience. “Not facing additional work absences reduces some of the stress these families are under,” says Hopkins.

The 24-Hour Care Progression Team includes nursing, case management and social workers, as well as physicians and residents. At the same time that the team wanted to expand discharge hours, it also wanted to reduce the time between when the discharge order was entered and the time of actual discharge. These combined efforts led to a 30 percent reduction in that metric and nearly a 30 percent drop in length of stay.

“It’s increased access and throughput, and I’m looking now at its impact on the bottom line,” says Hopkins. “But the real value is how much our patients and families appreciate getting home as early as they safely can. It’s just the right thing for the patient.”

Of the award, Hopkins says: “It is a big honor for the group, and it really was a group effort: Nursing, social work and residents took ownership of the changes we needed to make. Receiving the award has inspired us to keep going and find new ways to improve care.”