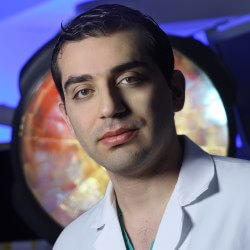 Not all patients are good candidates for surgery. On the other hand, says Mohamad Allaf, he has seen more than a few patients who have been told elsewhere that systemic medication was their only option, “and we looked at the clot and found that it was totally resectable.”

It’s a nasty-looking chunk of cancer, a plug of renal cell carcinoma that sometimes finds its way into the inferior vena cava. Because of its location in the body’s largest vein and its potential threat to the heart and brain, this tumor thrombus is serious indeed.

“If it’s just blocking the vena cava and not invading into the wall,” says urologist Mohamad Allaf, “for many people, this occlusion is the biggest threat to their life.”

But now, says Allaf, with the help of a specialized team and a meticulously choreographed, multidisciplinary approach, this clot is often very treatable. “If we take that threat away, and there’s no metastasis, many are actually cured of their disease.” Some people also need medical therapy to take care of any remaining tumor.

Because the vena cava, like an interstate highway, traverses multiple jurisdictions, treating a thrombus there tends to be bigger than any one specialty. Allaf, director of minimally invasive and robotic surgery, works with a group of surgeons whose combined expertise covers the entire vein; his territory includes the urologic areas.

If the tumor lies below the diaphragm, he usually turns to vascular surgeon James Black. “Often, we need to open up or even resect the vena cava and then reconstruct it,” Allaf explains.

When the tumor sits closer to the heart, cardiothoracic surgeon Ashish Shah steps in. “Sometimes we put patients on bypass,” says Allaf, “so that we can get good access to the vena cava near the heart. At times we’ll even open up the heart to remove the tumor.”

Rarely, there is tumor in the bowels or liver, and this requires a general surgeon, as well. A medical oncologist manages systemic therapy.

Surgical procedures are performed in a special room that has bypass equipment. The group also has its own anesthesia team that monitors the thrombus using real-time transesophageal ultrasonography. “Via ultrasound,” Allaf explains, “they show us the clot on a screen while we’re operating.” This is essential, to avoid dislodging part of the clot and sending a shower of particles up into the heart or lungs.

The team mobilizes as soon as a patient comes in and is identified as a good surgical candidate. Allaf, along with urologists Edward Schaeffer and Ronald Rodriguez, oversees the initial evaluation.

“Often,” he says, “we’ll admit patients to the hospital the same day we see them, because a tumor thrombus is a ticking time bomb.”

The team is so cohesive, he adds, that even if particular surgeons are not directly involved, they stop by anyway during the operation just in case their expertise is needed.