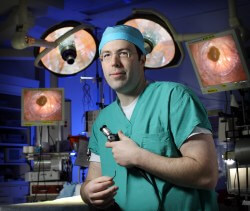 As stones go, cystine stones are as tough as the proverbial boot. They laugh at lithotripsy. More like unyielding granite than crumbly sandstone, they’re also the gift that keeps on giving: For people with cystinuria—caused by a genetic defect that impairs the body’s ability to transport cystine and other amino acids in urine—these troublesome stones are a recurrent problem that starts in childhood and lasts a lifetime. The disease also tends to run in families.

Now, cystinuria has its own multidisciplinary clinic.

Urologist Brian Matlaga treats dozens of these patients a year, primarily by removing the stones through ureteroscopy. He has teamed up with Johns Hopkins nephrologist Michael Choi to offer cystinuria patients a dual focus on treatment and long-term management—a combined surgical and medical perspective.

“Sometimes these patients have a disconnect,” Matlaga says. “They’ll have just a urologist, or just a nephrologist, and they’re missing out on half of their care plan; they’re only getting that one viewpoint. Or, they’re seeing a urologist and a nephrologist who have no relationship with each other, so the right hand doesn’t necessarily know what the left is doing. We approach these patients together.”

The clinic also includes dietitians because a low-salt, high-fluid diet can help reduce or delay recurrence of stones. The dietitians serve as sounding boards for clinic patients who have questions about low-methionine, vegetarian and other diets they’ve heard about.

With good management, people with cystinuria can live a normal life, with no other kidney problems besides recurring stones. “The patients know the drill,” says Matlaga. “I’ll get phone calls and e-mails saying, I’m starting to get a little soreness in my kidney—can we check it out?”

Matlaga hopes to collaborate with basic scientists to explore the disease’s genetic component.

Among other things, he notes, this may lead to better medical therapy.

“The medications we’re using are two decades old,” he says. “I think the advances will come from places like here, where there are people who are interested in this disease.”