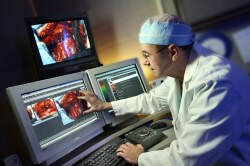 Patrick Walsh has made impressive new discoveries by replaying his own operations.

How do you make a good operation even better? Ask Patrick Walsh and he’ll tell you the key is something professional athletes have used for years—a video camera.

Twenty-eight years ago, Walsh developed the nerve-sparing radical prostatectomy. Ever since, he has worked to reduce its two major side effects, impotence and incontinence.

“I knew that minor differences in technique made a big difference,” he says, “because I would operate on two people, doing what I thought was exactly the same operation on the same day, and one would have a perfect result immediately, and the other one’s outcome might be delayed for months or years.”

But it was impossible for Walsh to make satisfactory connections between what happened during surgery and the outcome; too much time had passed.

Then, 14 years ago, he began videotaping his operations. He spent long hours scrutinizing the tapes, looking at men who had recovered quickly and at men who were still not potent after a year. Sometimes he studied the film frame by frame.

“If you didn’t realize it, you could go where you thought everything was safe, and it really wasn’t.”

Gradually, he identified some slight variations in his technique—in controlling bleeding from the dorsal vein and dividing the sphincter—that appeared to make the difference in the men who recovered sexual potency the soonest.

He also learned that some men have a slight anatomical variation in the location of their neurovascular bundles, the very delicate nerves on either side of the prostate that are responsible for erection. The key to preserving potency, he discovered long ago, is to remove the prostate without injuring these nerves. But in these men, “if you didn’t realize it, you could go where you thought everything was safe, and it really wasn’t.”

Walsh has continually refined his procedure. Inspired by laparoscopic prostatectomy and its close kin, the robotic laparoscopic procedure, he reduced his incision size to three inches several years ago. He also started using a technique called high anterior release of the neurovascular bundles, which has further eased traction on these fragile nerves.

“At 18 months,” he says, “we had around 90 percent potency, and using this technique, we moved it up to 12 months.” This work was published in the Journal of Urology in December 2008.

With the use of a Babcock clamp at the bladder neck, he can see further around the posterior side of the prostate, and with better access, he is able to release these nerves even more gently.

“I’ve already had what appear to be some immediate responses that I have not seen up to this time,” he says. “I haven’t validated them yet, but I am very enthusiastic about this, because at least as a surgeon, I can see much better.”

Again, he’s watching his videotapes to confirm these findings.

When Walsh first started using the video camera, he says, “some of my patients asked, aren’t you afraid of being sued? My answer was no, because it wasn’t that I did something wrong, it was that somehow or other, I did something better, and I wanted to know what it was. On the videotape, you can see the entire field, the secondary consequences in what your fingertips may be doing, things you never saw before. It really is a revelation.”

To learn more about how Patrick Walsh performs the radical retropubic prostatectomy: http://urology.jhu.edu/prostate/video1.php