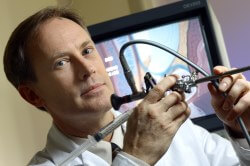 With an array of options, pelvic floor expert Duane Cespedes can tailor treatment even for patients who thought they just had to live with their condition.

Until recently, there were few options for women with stress incontinence who are unable to undergo open surgery, or for women whose urge incontinence persists despite anticholinergic drugs. Some of these women can be helped with a neuromodulator device called InterStim—think of a pacemaker for the bladder—which is implanted in the back. In fact, Cespedes,  co-director of the Johns Hopkins Women's Center for Pelvic Health, and colleague Jamie Wright, have placed hundreds of these devices with great success.

What happens when the patient is an 80-year-old on Coumadin? “In the past, these women have just stayed wet,” says Cespedes. If only they knew how little it would take to fix their symptoms, he adds. Cespedes has been using Botox to treat refractory urge incontinence since 2003. Using local anesthetic, he injects the neurotoxin directly into the bladder wall in 15 to 20 sites; the procedure takes less than 10 minutes. One treatment of about 200 units of Botox lasts six months to a year.

Similarly, Cespedes has been using “bulking agents” such as collagen and Coaptite in women with stress incontinence—the unwelcome surprise that follows a sneeze or cough—since 1996.

Although many of his patients are older or infirm, he says, “I’ve also used it on young women who had their first child, had leakage and can’t be as active as they want to be. I inject them, and they’re dry; they can have more children and then have a definitive procedure in the future.” In this case, the treatment involves a transurethral injection into the bladder neck, done with local anesthesia, that lasts anywhere from six months to two years.

At Hopkins, the injections are done in the clinic. Cespedes uses the same specialized cystoscope, with a 23-gauge needle, for both procedures.

One step up from injections, for stress incontinence, is the mini-sling. “It can be placed very easily in just 15 or 20 minutes using sedation and some local anesthesia,” says Cespedes. “Although this is done in the operating room, it’s a pretty minor procedure and much less invasive, requiring only one very small vaginal incision.”