Antibiotics for Vesicoureteral Reflux: Thumbs Up or Down? 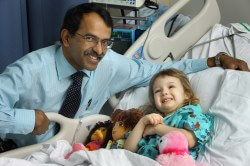 It’s rare for an entire specialty to consider overhauling its approach to time-honored treatment, but Ranjiv Mathews says the data leave no choice.

Twice recently, pediatric urologist Ranjiv Mathews has tried to present multiple cases to a medical audience and never gotten past the first patient. There were too many questions. His subject? Vesicoureteral reflux.

Briefly, here’s why this condition is so confounding: About half of all kids who have a urinary tract infection (UTI) turn out to have vesicoureteral reflux; urine backs up from the bladder into the kidneys. Often, the reflux inexplicably goes away on its own. But sometimes, it causes scarring in the kidney, which can be severe. “About 30 percent of patients who wind up getting a transplant,” says Mathews, “get there because of reflux.”

One popular fix for reflux is mechanical: Stop it surgically by re-routing the ureters. But a large study in the 1980s showed that this didn’t necessarily prevent kids from getting more UTIs and developing more scars. Then there’s the preventive drug route: Ward off UTIs by giving children antibiotics, sometimes for years. But some studies have found similar rates of infection in children who get antibiotics and those who don’t. And this, too, is complicated. Are the parents remembering to give these kids their medicine every single day, for years? And if the antibiotics don’t work, is it because children develop resistance, or because the drugs are inadequate, or because they just didn’t get taken?

Mathews has helped design what the NIH hopes will be the landmark study on this issue: Randomized Intervention for Vesicoureteral Reflux (RIVUR). Six hundred children around the country are being randomly assigned either to a placebo or the antibiotic Bactrim and followed for two years to see whether they develop breakthrough infections or kidney scars; Hopkins is one of five primary investigative sites. The stakes are high, Mathews says: “It’s going to make a major impact on how these children are treated.”