Meet the New Executive Vice Chair of the Department of Medicine 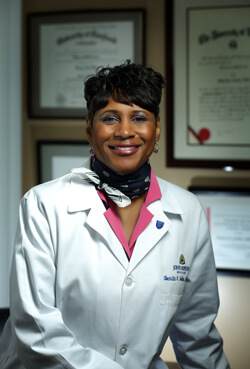 The first patient Sherita Golden encountered as a medical student at the University of Virginia had multiple end-stage complications of type 1 diabetes. He was blind in one eye, had a kidney transplant because of renal failure, had cardiovascular disease and already had a couple of amputations. He was also just 31 years old.

That was in 1991. Two years later, the National Institute of Diabetes and Digestive and Kidney Diseases published the results of its Diabetes Control and Complications Trial, which showed that tight glucose control could prevent serious diabetes complications.

“That’s what really inspired me to pursue a career in diabetes,” says Golden, the Hugh P. McCormick Family Professor of Endocrinology and Metabolism, and a well-known expert in the field. Now, she says, unless patients don’t have access to care, serious complications are much less common. In addition, many patients are diagnosed earlier and treated more aggressively, and clinicians have a large arsenal of medications available for type 2 diabetes.

For nearly 20 years, Golden has made her mark using epidemiological tools to study hormonal factors associated with the development of diabetes and cardiovascular disease, examining mental health complications of diabetes, exploring the association of endogenous sex hormones with atherosclerosis and insulin resistance in postmenopausal women, and understanding and eliminating diabetes health disparities. One of her seminal papers, published in JAMA in 2008, reported a bidirectional relationship between depression and diabetes.

Now, as newly appointed executive vice chair of the Department of Medicine, Golden aims to apply the same rigor to advance academic and institutional goals.

In her new role, she’ll work closely with administrators and leaders throughout Johns Hopkins Medicine, participate in department policy formation and implementation, plan partnerships between various JHM constituencies, assist in faculty recruitment and retention, and serve as acting director in the director’s absence. One of her first tasks is developing a compensation model that explains how faculty members are recognized for their contributions.

Having an impact on all three areas of Johns Hopkins’ missions is what attracted her to the position, she says: “I’m very interested in how to align our academic mission with health care delivery. As health care evolves, it’s really important that we not only develop and implement innovative clinical programs, but that we apply quantitative methods to assess the impact and outcomes of those initiatives.”

At the same time, Golden remains committed to strengthening diabetes research and care. In 2012, she co-chaired a meeting of diabetes and depression experts from 15 countries. Their consensus was that both disorders share common risk factors, like low socioeconomic status and poverty, early life experiences and stressors, and even common insults in the intrauterine environment that predispose individuals to developing both conditions. “If we can target some of those upstream risk factors,” Golden says, “it might lead to preventive strategies for both disorders.”

As for her new leadership role, Golden says it offers a chance to give back to the department as thanks for the “wonderful” mentorship and leadership training she received as a house officer, a fellow and then as a young faculty member.

“It’s a full-circle experience, because I remember coming to the Tumulty Conference Room [on the 9th floor of the 1830 Building] for my internship interview in December 1993,” she says. “It’s very humbling to now have an office up here.”