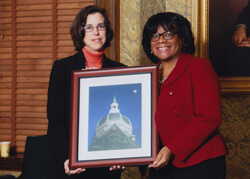 Sophie Lanzkron, left, presents Karen Proudford with a gift in appreciation for her support for the Johns Hopkins Adult Sickle Cell Center.

Growing up as one of four siblings in Delaware, Karen Proudford says her father was an incredible role model, despite having a number of health challenges, including sickle cell disease, progressive and profound hearing loss, diabetes, and kidney failure. He was a devoted family man with a love for lifelong learning who always attended his children’s football games and recitals.

“Near the end of his life, we found that we didn’t know much about sickle cell disease, and physicians didn’t have a lot of training in it,” says Proudford, an associate professor of business administration at Morgan State University in Baltimore. “After he passed in 2004, we wanted to raise awareness of the disease. At the time, we had no idea how great the need was.”

In 2005, Proudford and her family started the William E. Proudford Sickle Cell Fund Inc., to support leading institutions in the mid-Atlantic area and to build awareness of the disease. They raised $100,000 for the Nemours/Alfred I. duPont Hospital for Children in Wilmington, Delaware, in 2006. Then, because Proudford and two of her siblings lived in the Baltimore area, they looked online for an organization to support here, finding the Johns Hopkins Adult Sickle Cell Center and its director, hematologist Sophie Lanzkron.

The Proudfords and Lanzkron soon developed a working relationship, with Proudford serving as the community representative on the steering group for Johns Hopkins’ participation in the Improving Health Outcomes and Medical Education for Sickle Cell Disease network. The group connects Marylanders with sickle cell disease with primary care providers and to support the doctor-patient relationship.

Proudford and Lanzkron also served together on the Maryland Department of Health and Mental Hygiene’s Statewide Steering Committee on Services for Adults with Sickle Cell Disease, and Proudford attended the opening of The Johns Hopkins Hospital’s Sickle Cell Infusion Center in 2007.

“Every time they’ve reached out to make sure the community is involved, we’re happy to help out,” Proudford says.

Last fall, the foundation raised another $100,000, this time to support sickle cell disease efforts at Johns Hopkins. Raising such a large amount for sickle cell disease is “a remarkable achievement,” Lanzkron says. “It’s a very underfunded area, not only by the National Institutes of Health, but also by philanthropic organizations,” adds Robert Brodsky, director of the Division of Hematology. Some people are still unaware of the disease, and others don’t know that treatments, such as stem cell transplants, are now available. “This is a real morale-raiser not only for the patients, but also for our doctors and nurses.”

The money will be placed into an endowment toward research projects in stages too early to receive federal funding, Lanzkron says, as well as toward patient needs, like transportation to medical appointments.

“It’s a privilege to be part of this,” Proudford says. “I wish we had millions of dollars to donate to organizations that do so much for patients with sickle cell disease.”

“They are just amazing people who share a similar goal: To improve the quality of care of adults with sickle cell disease,” Lanzkron says. “It’s really a pleasure to work with them.”

Learn more about the Johns Hopkins Adult Sickle Cell Center at bit.ly/jhmsicklecellcenter. For more information about the foundation, visit wepsicklecell.org.