Restore - Rebuilding a Life After TBI

Rebuilding a Life After TBI 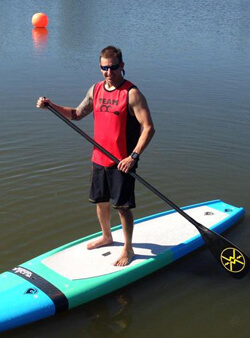 1 2 3
“I think of my brain as a computer with a virus,” says Corey Davis. “Everything’s still in there, but it might take a little longer to process things.”

In the aftermath of his June 2006 motorcycle accident, Corey Davis remembers little–except awaking from a seven-week coma thinking he could move.

Davis had sustained a lacerated kidney, crushed pelvis, dislocated bones in his hand and a separated shoulder—injuries that rendered him immobile. Making matters worse, he had significant cognitive impairments due to traumatic brain injury (TBI).

Months of inpatient stays followed at several hospitals and a rehab center. Though Davis, a former construction company superintendent, praises his early caregivers’ efforts, he says few expected him to live without a wheelchair or to regain much cognitive function.

But a consultation with Kate (Kortte) Bechtold in May 2007 would prove transformative. Bechtold, who directs the Johns Hopkins Brain and Stroke Rehabilitation Program (formerly the Outpatient NeuroRehabilitation Program), says she knew immediately that Davis would benefit from it, even though at their initial meeting Davis couldn’t carry information over for more than a day. His wife was managing his life, and he was stuck at home with little to do. His speech was barely intelligible.

After performing a complete neuropsychologic evaluation, Bechtold worked with Davis to address his cognitive impairments, fatigue and emotional adjustment. Davis also began working with the program’s physical and occupational therapists, speech-language pathologists and physiatrists. Among their early goals is getting clients to define precisely what they want out of rehab. For Davis, despite his limitations, depressed state and slow affect, it was being able to return to competitive sports.

Over the following year, Davis wowed therapists as he stopped using a wheelchair and began walking greater distances. He also dramatically improved his ability to manage his own life by practicing strategies to compensate for memory and behavioral lapses. By the end of that year, Bechtold recalls a turning point. “You know,” said Davis, “I’m such an active guy, and I’m tired of not being active.” Soon after, he started jogging—first 50 feet, the next day a little farther.

Even so, there were days when he asked, “Why bother?” The demise of his marriage stymied his progress for a while. Bechtold says it’s a common scenario, and she’s tapped into her marital counseling training to help Davis cope. Davis also met regularly with Johns Hopkins neuropsychiatrist to stay on top of emotional hurdles.

Today, eight years since the accident, Davis, 45, has completed half-marathons, triathlons, the 4.4-mile Great Chesapeake Bay Swim—twice—and a Potomac 7.5-mile swim. He has requalified for both a driver’s license and certification as a boat captain. And except for a slight slur, his speech is lucid. He works as a mentor to young adults with disabilities, coaching them on how to live more independently, and has established a nonprofit to support and raise awareness about traumatic brain injury research.

Though he attributes much of his success to sheer grit, Davis says he could never have reinvented himself without the help of Bechtold and the neurorehab team. “They saved my life,” he says. “They saved the quality of my life.”

During her first meeting with Corey Davis and his family, Bechtold recognized a familiar fear: that because an entire year had passed since his traumatic brain injury, any further recovery would be minimal.

Not so, says Bechtold: “Functional recovery can continue throughout the person’s life. Instead of focusing on the brain injury itself, we recognize the resiliency of the brain, body and spirit, and we encourage each patient to define and address obstacles.”

Bechtold’s “we” are the specialists in the Johns Hopkins Brain and Stroke Rehabilitation Program that she directs: physiatrists, physical and occupational therapists, speech-language pathologists, rehabilitation neuropsychologists and a social worker, who meet every Tuesday to recap the details of each patient’s progress and revise the rehabilitation plan to address persistent impediments. The literature, she says, supports the idea that people with TBI who receive physical and occupational therapy without involving other disciplines don’t fare as well. Bechtold is board certified in clinical neuropsychology and rehabilitation psychology, and the rest of the rehabilitation team has special training to work with individuals with brain injuries and illnesses.

Patients with TBI, says Bechtold, “are complex human beings with complex problems. They need each expert looking at that person through their lens, noting functional limitations and developing a comprehensive plan.” It’s through the passion of these providers, she adds, “that our patients have such high success rates."

Founded in 2002, the Johns Hopkins Brain and Stroke Rehabilitation Program (formerly the Outpatient NeuroRehabilitation Program) specializes in treating people with traumatic brain injuries and brain illnesses as a result of stroke, tumor or infection. Services include:

To learn more about the program, visit bit.ly/JohnsHopkinsBrainandStrokeRehab.