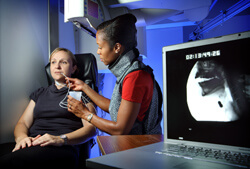 1 2
Ianessa Humbert has found that patients who view videos of their swallowing are more likely to remember how to correct errors.

Swallowing is something you shouldn’t have to think about, says Ianessa Humbert—unless you’re a patient with a swallowing disorder. In that case, says the dysphagia researcher for the Johns Hopkins University School of Medicine’s Department of Physical Medicine and Rehabilitation, knowledge is power. Simply raising awareness about the mechanics of the complex sensorimotor task, she explains, can help these patients prevent serious consequences, like aspiration pneumonia.

With support from two new grants, Humbert is testing the effects of motor learning on swallowing using electrical and educational feedback in the Johns Hopkins Swallowing Neurophysiology Laboratory, which she oversees. Her research focuses on error-based and skill learning in patients with a history of swallowing problems primarily due to  neurological damage—as well as in healthy subjects. To her knowledge, these are among the first studies directly testing the principles of motor learning on swallowing.

Building on investigations with Pablo Celnik, medical director of the Johns Hopkins Hospital Outpatient Neurorehabilitation Program and interim director of the Department of Physical Medicine and Rehabilitation, Humbert and her colleagues aim to empower patients to correct swallowing problems through tested motor learning techniques.

“Oropharyngeal swallowing offers a unique opportunity for observing how performance is affected by feedback,” says Humbert. That’s because, she explains, the act includes both volitional (chewing or food preparation during the oral phase) and reflexive components (e.g., pharyngeal contraction and airway closure). And, as with autonomic functions, such as heart rate, blood pressure and other tasks not visible during execution, the pharyngeal response is amenable to volitional override.

Using surface electrical stimulation on the neck, Humbert induces “perturbations” (disruptions) to see if swallowing function has the ability to adapt over time. “We’ve found that it does,” she says. Even verbal biofeedback, she adds, has proved effective.

In the context of motor performance, feedback is often categorized by knowledge of performance and knowledge of results. During one test conducted with postdoctoral fellow Phoebe Macrae, participants were instructed to hold their Adam’s apple up as high and as long as they can. “Targeting prolonged laryngeal vestibular closure (LVC),” she says, “allows us to assess the effect of feedback on subjects’ ability to volitionally control predominantly brainstem-mediated swallowing.” Verbal cues lead to improved ability to prolong LVC during a unique swallowing maneuver, compared with no cues.

In addition to electrical stimulation, Humbert uses functional MRI, noninvasive neural stimulation and video fluoroscopy to shed light on which portions of a patient’s cortex are associated with swallowing behavior.

Ultimately, says Humbert, through motor learning, “Patients can be taught to predict the presence of perturbations and reduce errors in swallowing before they occur.” Considering the growing population of older adults at high risk for feeding tube placement or aspiration pneumonia, she adds, the need for potentially successful interventions like these grows ever stronger.