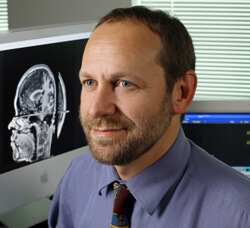 Conventional medical wisdom holds that brain injury in adults causes irreversible neuronal damage. But Pablo Celnik has spent the greater part of his career trying to prove otherwise—testing novel ways to jump-start the brain’s circuits. Now the medical director of the Johns Hopkins Hospital’s Outpatient Neurorehabilitation Program is finding that patients who have strokes can recover motor skills through a combination of noninvasive brain stimulation and repetitive learning strategies.

Celnik and colleagues have been using transcranial magnetic stimulation (TMS) to investigate brain functionality in healthy individuals and in patients post-stroke. These studies build on recent advances in neuroscience validating Celnik’s long-held views that change in neuron structure or function is possible following a stroke or other brain injury. TMS, argues Celnik, can be used to create magnetic field pulses, which in turn may induce electrical activity in focal brain areas to enhance learning.

But to reinforce that learning, says Celnik, who is also vice chair for research in the Department of Physical Medicine and Rehabilitation, these patients need repetitive training. Initially, Celnik and Kennedy Krieger neuroscientist Amy Bastian evaluated healthy individuals and whether brain stimulation and split-belt treadmill training—used simultaneously—could hasten improvement in walking gaits.

Forty healthy participants with a mean age of 27 began two minutes of slow, split-belt walking, then were subjected to a 15-minute period in which one belt went much faster than the other so that participants began to drag one foot, simulating a limp. Typically, participants corrected the limp within 10 minutes.

The subjects were randomized into five groups and received a mild, noninvasive electrical current through a cap and electrodes, running either to or away from the part of the cerebellum that controlled either the faster or slower leg. The fifth group wore the cap but got no current. All participants adapted to the different speeds, but the ones who received electrical current to the part of the brain corresponding to the leg that eventually changes its pattern adapted faster.

Making and correcting errors, explains Celnik, helps the brain adapt to a new task. The split-belt treadmill training used in the study induces or worsens errors in walking. But the brain eventually self-corrects those errors. Applying brain stimulation helps speed up this learning process.

For the majority of patients who have strokes, damage occurs in the cerebrum, which governs speech and thinking. The cerebellum, which directs key motor functions, still works. In theory then, says Celnik, these post-stroke patients should respond to similar training. And in 15 of 17 of these patients enrolled in a recent study, that’s exactly what happened. Indeed, these patients were able to learn how to correct their abnormal walking pattern faster with longer lasting duration effects when the training was done, combined with cerebellar stimulation.

Considering that stroke remains the leading cause of long-term disability in the United States, Celnik feels a greater urgency to win support for his work to help these patients improve their lives. “When we combine brain stimulation with behavioral training, it sticks. These patients’ memories remained present for at least three months.”