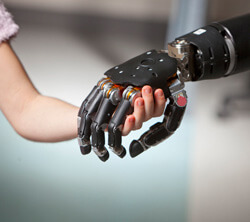 1 2
This motorized bionic arm is powered by the same nerves, muscles and brain transmissions that enable us to dial a phone.

For hundreds of years, inventors have attempted to design better, more functional prosthetics enabling amputees to perform otherwise impossible tasks. But while legs have come a long way—even allowing paraplegic athletes to compete in Olympic running—arms haven’t quite kept up. Years ago, the height of sophistication for prosthetic arms would have been one that allowed for different attachments—a fork, a hook, a blade—or perhaps a claw that opened and closed. It was a far cry from a titanium leg with a battery-powered, gait-correcting ankle. But now, with the introduction of a motorized bionic arm that’s powered by the same nerves, muscles and brain transmissions that enable us to dial a phone, prosthetic arms are starting to keep pace.

“Until recently, the most advanced prosthetics you could find still only offered a grasp that simply opened and closed,” says trauma surgeon Albert Chi. “Now we can do eight different grasp patterns.”

In addition to performing targeted muscle reinnovation, the surgery that saves and reroutes the nerves needed to carry out fine motor skills, Chi is working with prosthetic manufacturer Hanger Inc. to design and manufacture the most lifelike prosthetic arm ever. Anticipated to become available to patients this year, the arm is controlled much in the way a natural arm would be: by picking up on a set of finely tuned communication patterns between nerves and muscles.

It’s not necessarily automatic, though. Even with the nerves and muscles intact and ready to transmit signals, using the arm requires intensive training and physical therapy, which includes practicing with a virtual reality program. “It’s not completely intuitive the first time you work with it,” Chi explains. “We go through an intensive training program so that they can succeed.”

Much of the challenge is rooted in the difficulty of reteaching fine motor skills—a trickier task than gross motor skills, such as walking or crawling. For prosthesis designers and surgeons, it’s much simpler to design a leg or perform a surgery that facilitates walking, which requires coordination of a much simpler muscle group. Using the virtual reality training program, however, Chi and his colleagues can help patients learn to classify and control different kinds of motions and grips and, eventually, use the bionic arm and hand as fluidly as possible. “Everyone is a little different,” Chi says. “Some people catch on right away. Others don’t catch on for 10 days. Ultimately everyone we work with becomes highly proficient with it.”