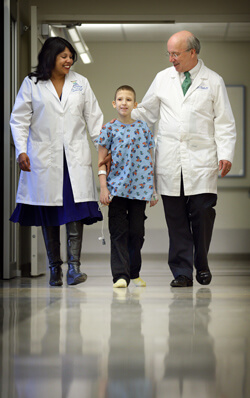 1 2
Sapna Kudchadkar and Frank Pidcock take a walk in the PICU with an 11-year-old patient a week after heart surgery. He began taking steps by day two.

Could early mobility of children — even infants — in the pediatric ICU improve their outcomes? Initial findings in a new Johns Hopkins Hospital pilot study called PICU Up! offer promise.

Pidcock, who is also vice president of rehabilitation for the Kennedy Krieger Institute, had searched for studies on early mobilization in the PICU and found only a handful. He wasn’t surprised.

“When it comes to kids” — especially those who’ve had lots of surgery and have many lines — “people are afraid to move them,” he says.

Still, he was encouraged that those studies demonstrated some benefit to PICU patients. Pidcock garnered support from Needham and two other colleagues who have championed early movement in the PICU: Johns Hopkins pediatric anesthesiologist and critical care medicine specialist Sapna Kudchadkar and PICU nurse practitioner Beth Wieczorek.

Together Kudchadkar and Wieczorek summarized the current evidence surrounding rehab therapies in the PICU. A synthesis of results showed that early rehab in the PICU is safe and feasible, with potential short- and long-term benefits. Using those findings as a guide, the team has crafted what they say are safe protocols and guidelines for promoting early and progressive movement in the PICU.

Kudchadkar and her colleagues had already updated a PICU protocol aimed at reducing over-sedation to improve sleep patterns and outcomes, an approach grounded in research. Despite initial fears that kids who were too awake during the day might pull out lines, limiting sedation hasn’t caused harm, says Kudchadkar. And, when these children are more rested, she adds, they’re more likely to participate in rehab.

Pidcock is quick to point out that the team is going about the protocols in a scientific, thoughtful way. “We’re focused on safety first,” he says.

Heterogeneity in age can pose a challenge, notes Kudchadkar, and sometimes small children require heavy sedation. “But if we use a safe, paced approach,” she says, “the benefit far outweighs the risk of moving these children.”

High on the priority list is engaging all staff involved in the child’s care — physical and occupational therapists, respiratory therapists, nurses, physicians and child-life specialists.

“Our goal is to get people thinking about mobilization by day one and ensure that every child has a PT and OT evaluation by day three,” says Kudchadkar, “because after three days, they are at higher risk for complications.”

In a recent case, a 9-year-old girl diagnosed with nasophargyngeal rhabdomyosarcoma was admitted to the PICU and placed on a ventilator. Soon afterward, the team helped her sit up in bed, and the next day helped her to stand next to the bed.

On day three, she was walking — and progressed to walking with assistance to the playroom, where she was able, with help, to play with dolls. She’s now home and doing well, says Kudchadkar.

“The key was keeping her comfortable with pain medication and optimizing her sedation so that she could participate actively.”

Pidcock hopes outcomes like these will continue to validate the PICU Up! model, not only to improve children’s function in the PICU, but also their quality of life.

Learn more about Dale Needham’s groundbreaking research on early rehab in the ICU.