Embracing the Physician's Role in Safety

Daniel Brotman, head of the hospitalist program at The Johns Hopkins Hospital, explains how he works to get physician buy-in on patient safety efforts. 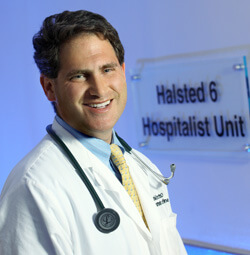 Patient safety efforts often fall flat when there's no buy-in from physicians. So when Daniel Brotman, head of the hospitalist program at The Johns Hopkins Hospital and medical director of the 17-bed hospitalist unit, takes on a new initiative, he knows that one of his biggest challenges will be getting doctors to accept new processes and roles. Brotman explains how he's worked to bring about that change.

Why don’t some physicians buy into patient safety efforts?

Some physicians feel that patient safety efforts threaten their autonomy—for instance, by standardizing how care is delivered or requiring double-checks to prevent mistakes. They also worry that new initiatives will make their workdays longer or less efficient.

But as physicians, we need to recognize that we’re part of a larger system and that we sometimes need to take extra steps for the patient’s benefit. If we participate in crafting these initiatives so that they improve care without impeding workflow, we can make our lives easier.

What’s an example of that?
There was a successful effort at Hopkins Hospital, spearheaded by the head of the hospital’s anticoagulation management service, to make sure that physicians consider prophylaxis for deep vein thrombosis. Although doctors know that they need to think about preventing harmful blood clots, they don’t do so every time. But today, our computerized provider order-entry system won’t let them admit a patient unless they consider DVT prevention, and it uses an algorithm to help physicians prescribe what’s recommended based on American College of Chest Physicians guidelines. Providers can still deviate from these guidelines for valid reasons.

What is the physician’s role in fostering safety?
Physicians sometimes like to feel that they are the captain of the ship, but they need to know that they cannot drive it all by themselves. Health care is so much more complex than it used to be. As a physician, I need to realize that I work with a host of people who have jobs that I will never master, and I need to empower them to do those jobs as well as possible.

To accomplish that, physicians need to view themselves not only as doctors but as liaisons and communicators, articulating what’s happening with each patient and hospitalization.

How does your unit do this?
One of the main tools is multidisciplinary rounds, which is not historically done in Internal Medicine here. Every morning, members of the care team meet to discuss what we plan for each patient that day. Led by physicians, the group includes a nurse, the clinical pharmacist, a social worker and a case manager, and the goal is to make sure that everybody is on the same page. For instance, if the patient needs to get two different studies, does it matter which one comes first? Does the patient need to be NPO [nothing by mouth] for the studies? What are we going to do based on the results? Will it affect discharge planning? The plans that get clarified during multidisciplinary rounds make everybody’s work easier and make it less likely that a nurse will call later with an urgent question because the physician’s orders were confusing.

Did physicians resist these rounds?
After these rounds were introduced a few years ago, I’d hear that certain physicians weren’t participating. When I spoke directly with these physicians, I discovered that many were frustrated with the time it took.  Multidisciplinary rounds should last a few minutes, at most, per patient and focus on the day’s plan of care. But some physicians had tried to run them like the morning rounds typical of a teaching service—by going over the patient’s complete medical history, their exam findings and so forth—which could take 10 minutes. Once we clarified the expectations, adoption improved. Now it’s just part of the way we do things.

What effect have multidisciplinary rounds had on safety?
On our unit, hospital-acquired infections and “never” events occur so infrequently that you shouldn’t notice a dramatic reduction. However, our retention rate of nurses has gone way up, and I think that’s partly due to the increased camaraderie among different types of providers. If you have a team that is cohesive, it’s going to be a lot easier to put in place new patient safety processes.