Psychiatry Newsletter - Hope for Staying Off the Fat Track

Hope for Staying Off the Fat Track 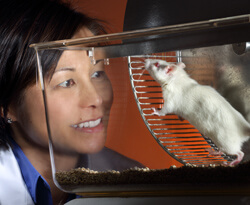 Recent work from Psychiatry researcher Kellie Tamashiro has given new meaning to the old saw, You are what you eat. She’s also found evidence to support an important corollary: You don’t have to be what your mother ate.

Tamashiro’s studies focus on maternal diet and stress and their long-term effects on offspring, including increased body weight, impaired glucose tolerance, depression and anxiety. Now, she’s shown that interventions can rescue the health of rat pups otherwise destined for a life of ailments.

In one study, Tamashiro and colleagues fed pregnant rats either a high-fat or regular chow diet. Then, after the pups were born, some were cross-fostered to be fed by mothers who ate the opposite diet.

“To our surprise,” she says, “the postnatal high-fat diet was what actually produced obesity. If we took pups from the moms eating a high-fat diet during pregnancy and gave them to standard chow moms to nurse, they did not develop obesity. They still had some visible deficits in glucose tolerance but not nearly as significant as those given a high-fat diet in the postnatal period.”

Another study indicates that exercise right after weaning—the human equivalent of adolescence—also helps prevent obesity. At 4 weeks of age, male pups from moms fed either a high-fat or regular diet either were given free access to running wheels or remained sedentary for three weeks, after which all rats remained sedentary. Rats exposed to high-fat diets in utero and during suckling that exercised still gained more weight overall, but had more lean mass than fat. And their brains regained some ability to respond to the hormone leptin, which suppresses food intake.

Even when the rats returned to their regular cages and diets for another two months, “we saw that persistent beneficial effect, which is very promising,” Tamashiro says. “It suggests that this early experience does have a long-term consequence.”

Early environment and its effects on development is an area being studied more and more, Tamashiro says, and has attracted the interest of the National Institutes of Health, “because trying to prevent disease from happening is probably going to be a whole lot more economical than trying to treat the disease, and probably a lot more effective.”

In rats, much brain development occurs postnatally, a rough equivalent of a human’s third trimester, she says. Future studies could investigate whether different durations or ages for exercise can further rescue rat pups from their obese fate, Tamashiro says, and whether exercising the mothers while pregnant also could help.

Translating the work directly to humans “is kind of a leap right now,” Tamashiro explains. “But the results of potential interventions such as a lower-fat diet and exercise early in life may help us to have an influence on children.”

Ultimately, she says, she’d like to try to see expectant mothers ncorporate healthier lifestyles in appreciation of the impact they can have on their children. She also would love to influence weight gain guidelines for pregnant women, which haven’t been altered in decades and are only now being revised: “We live in a dietary environment full of convenient, high-fat, high-calorie foods, and a lot more moms are overweight even prior to becoming pregnant,” she says. “We really need to rethink maternal dietary guidelines and gestational weight gain.”