From Grassroots to EPIC Psychosis Treatment 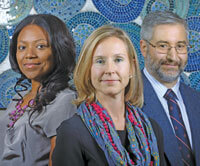 Presenting to Johns Hopkins during his first psychotic episode, the 16-year-old was 100 percent sure that what he needed was not medical care, but an exorcism. During his time in the hospital, he came to agree that he was psychiatrically ill and began to take medication. Once he left the hospital, however, he soon stopped returning for appointments. Therapist Krista Baker and a case manager went to his community to find him, and they learned that he was once again calling churches for an exorcis

“That event was so compelling, I couldn’t stop thinking about it,” says Baker. “So I researched existing models of care for adolescents with new onset psychotic episodes. There was very little out there.” In 2008, the Early Psychosis Intervention Clinic (EPIC) was born. Today, the program is at the forefront of a national movement to provide early, coordinated care for patients with new-onset psychosis and schizophrenia that includes individual and family therapy, medication management and case management services. The EPIC team includes adult psychiatrist Russell Margolis, child psychiatrist Carolyn Howell as well as therapists and case managers. A three- to five-day-per-week on-site rehabilitation program helps patients reach such goals as returning to school, developing social skills, strengthening interpersonal relationships and maintaining employment.

“Adolescents who get early treatment for their schizophrenia have a better prognosis and are more likely to stay on a nearly normal life track,” says Margolis. “Although the evidence is somewhat controversial, there is some suggesting that earlier treatment may also diminish ultimate damage to the brain.”

The program, which strives to prevent a chronic cycle of instability, downward spirals and acute episodes, seems to be working. As a result of the team’s efforts, many of the patients do not require repeated hospitalizations and report an improved overall quality of life. Adolescents stay with the program until early adulthood, when the team helps transition them to an adult-oriented level of care.

“More than 45 percent of our patients are either in school or working,” says clinic supervisor Krista Baker, who was and is a major force behind the clinic, “and the no-show rate is less than 5 percent, which is almost unheard of.”

As one of only a few such programs in the country, EPIC draws patients from well beyond the Baltimore area, and the team provides consultation services internationally, which can be an invaluable service for clinicians and patients with little or no access to comprehensive schizophrenia programs, especially ones that target early psychosis intervention.