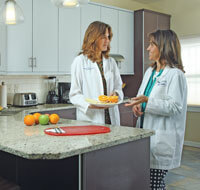 Medical professionals who treat eating disorders are seeing a new type of patient. In the last year alone, 8 percent of patients admitted to the Johns Hopkins Eating Disorders Program had a history of bariatric surgery, says the program’s director, psychiatrist Angela Guarda. Some patients developed an eating disorder after surgery. Others had a pre-existing eating disorder that worsened after gastric bypass.

Anorexia nervosa, bulimia and binge eating disorder are serious conditions that interfere with both physical and psychological health and quality of life. Some patients restrict themselves to eating only a handful of low-calorie foods; others intermittently binge eat high-calorie density foods and may vomit or abuse laxatives to compensate for bingeing. Binge eating is associated with a sense of loss of control over eating.

"Screening bariatric surgery patients for eating disorders before surgery and careful follow-up are required components of the multidisciplinary approach to bariatric surgery at Johns Hopkins,” Guarda says. “It is important to identify and promptly treat these conditions.”

And therein lie some of the challenges, as eating disorder behaviors are often secretive and accompanied by a sense of guilt or embarrassment. Following bariatric surgery, Guarda explains, occasional vomiting can occur in up to 40 percent of patients due to plugging of the stomach pouch by certain foods, such as dry meats and bread. In some patients, however, vomiting due to plugging may evolve over time into vomiting as a means of weight control and develop into bulimia or anorexia nervosa. Additional behaviors that may develop in the service of weight loss include chewing and spit- ting out food, picking and nibbling at food, and laxative or diuretic misuse. These are all warning signs of a possible eating disorder.

“We know that suboptimal weight loss and weight regain are not uncommon in patients who have undergone bariatric surgery,” says Guarda. Preliminary research suggests that experiencing a feeling of loss of control over eating may predict weight regain or inadequate weight loss after surgery. However, it’s far from clear yet which post-bariatric surgery patients are most at risk of actually developing eating disorders.

Once an eating disorder is diagnosed, the treatment of post-bariatric patients requires dietary interventions that differ from those used for other patients with eating disorders. “You can’t treat them the same way,” says Guarda, “because their anatomy has been changed. Surgery drastically reduces the size of the stomach, so patients cannot eat regular size meals, especially in the first few years after surgery. For those who have lost excessive weight and now have anorexia nervosa, this means we cannot prescribe the same weight gain diet we would recommend for a patient with anorexia nervosa and normal anatomy.”

Taking into consideration the different needs of this population, the Johns Hopkins Eating Disorders Program has adapted its protocol so that post-bariatric patients with eating disorders receive six small meals with increased percentages of protein but fewer calories, rather than eating three high-calorie meals per day, says Allisyn Pletch, a clinical nurse specialist in the Eating Disorders Center. They also need to drink fluids between rather than with meals to prevent liquid from filling their pouch and making eating more difficult.

Most important, however, is helping patients change behaviors that have become automatic or rewarding.

“With eating disorders, restricting, bingeing and vomiting become behaviors that are increasingly driven and difficult to interrupt,” says Guarda. “Treatment must focus on behavior change. Otherwise, bariatric surgery can be less effective over time.”