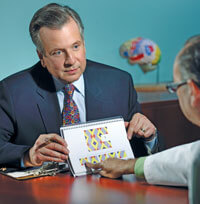 Two years ago, the directors of a large group medical practice approached Johns Hopkins psychologist Jason Brandt about providing neuropsychological assessments, not for their patients, but for their staff physicians. The practice management was primarily interested in detecting problems in cognitive functioning, such as memory, speed of processing and decision-making, that could put patients at risk, and they wanted to provide a mental health benefit for the physicians.

“The practice directors are very forward- thinking,” says Brandt, a professor of psychiatry and neurology and director of the Division of Medical Psychology. “They reasoned that they invest a great deal in recruiting their doctors and providing them with the resources they need to practice at a very high level. They want their physicians to be happy and successful, and this means attending to their cognitive and emotional well-being. In addition, if someone is having difficulty that puts patient welfare in jeopardy, it’s best to detect that before a problem emerges. This was their concern, especially with their more senior clinicians.”

In response to this request, Brandt developed the Physician Neuropsychological Wellness Program. Each physician met with a psychologist for an hourlong session, which included a comprehensive history and a discussion of a range of topics, including family life, career decisions, and stress and stress management. The physician then took two to three hours of neuropsychological tests focusing on concentration, working memory, executive cognition and psychomotor performance, and completed the mood, personality and symptom inventories. The results were conveyed in a detailed letter that included recommendations for intervention, if appropriate, and future follow-up.

“The beauty of the program as it is set up,” Brandt says, “is that the results of these baseline neuropsychological evaluations go only to the individual physicians, not to the practice management. However, if the practice directors have a significant concern about a specific doctor, they can also order ‘for cause’ evaluations, the results of which they receive.”

Even though many of the physicians were wary at first, says Brandt, most say they have enjoyed the experience. For many, it was the first time they ever discussed their life choices, joys, disappointments and frustrations with anyone, much less a mental health professional.

One of the challenges in constructing the protocol was to select cognitive tests that would be appropriate for very high-functioning individuals. “Most neuropsychological tests are intended to detect frank cognitive deficits, and many lack sensitivity on the high end,” says Brandt. “Since most doctors are bright, they can have subtle, but not insignificant problems that are not easily detected by most tests.”

Another assessment challenge, Brandt says, is determining neuropsychological benchmarks for use for competence to practice. This is especially problematic when evaluating older physicians. Should a 75-year-old physician be compared to other 75-year-olds, as is typically done in psychology, or to 35-year-olds who are at the top of their game? A 90-year-old doctor may be functioning at the 80th percentile of other 90-year-olds, but should he or she take out your gallbladder?

By comparing physician cognitive evaluations over time, Brandt hopes to identify markers of physician impairment, particularly in the prodromal period when interventions can be beneficial. The ultimate goal, Brandt says, is to help doctors have long and productive careers and fulfilling personal lives while simultaneously ensuring that patients are not exposed to unnecessary risks by distressed physicians.