An End Run Around Huntington's? 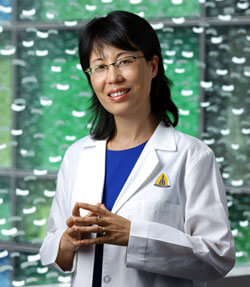 The small-molecule therapies Wenzhen Duan is developing may benefit more than Huntington’s disease. “We believe there’s a tie-in with Parkinson’s, Alzheimer’s and even the hearing loss that comes with old age.”

Would you complain? Perhaps not if you’re at risk of Parkinson’s, Alzheimer’s or Huntington’s disease and aware of recent research. A body of study shows that mouse and higher models of those illnesses show significant improvement by eating far less. Also, animals can postpone their onset with such a regimen.

The benefits of sharp caloric restriction (CR) in these neuropsychiatric diseases are no fluke, says neuroscientist Wenzhen Duan. In studies at the NIH and with her lab team at Johns Hopkins, Duan has documented CR’s positive effects on animal models, including mice that mimic Huntington’s. The disease onset is later. There’s roughly half of the whittling-away of the cortex and corpus striatum that mark the disorder—same with body atrophy. Balance and movement are far better.

Her work is vital in a field where understanding the biology has jumped, yet patients still have no way to stop the fatal illness.

Now Duan is milking CR for its therapeutic potential, though not by turning patients into ascetics. “If you’re thinking about restricting diets,” she says, “you’d have to think twice. It’s almost impossible to get people to cut calories by 30 to 40 percent long enough to get an effect.”

Duan set out a decade ago to learn CR’s underlying mechanism, hoping for a drug target to sidestep such a spartan diet. The first insights came fast, thanks, in part, to her team’s mouse model research. Not long after the Johns Hopkins reports on dietary restriction, scientists at MIT announced a likely agent of its effect.

Could sirtuins work for HD?  Duan believes so.

“People with Huntington’s are born with mutated genes, but most show no real symptoms until midlife,” she says. “Before that, they’re virtually normal. So whatever compensatory system a body uses to hold all this at bay must be very powerful until it’s eventually overwhelmed or declines. By protecting or boosting this compensatory system, we might extend its protective shield enough to give HD patients a normal lifespan.”

Barring a cure for the disease, then, an end run around it may do the trick.

So Duan’s team crossed mouse models of the disease with “designer” mice that overproduce a brain sirtuin. Instead of showing the usual quick decline, HD-prone offspring improved greatly in motor ability. “Especially exciting,” says Duan, “was that abundant sirtuin cut the dramatic brain atrophy you see in model mice or patients.”

But how to translate that to the clinic?  Duan’s lab is testing sirtuin activators—molecules small enough to cross the blood-brain barrier and enhance brain sirtuin activity. One particular agent that they’re shepherding with industry extends life significantly for the HD mice that eat it. “If we saw such a benefit in people,” Duan says, “we’d say their lives would be much improved.”

It’s still early days. The drug’s half-life makes it unstable as a useful therapy, but, working with medicinal chemists, Duan’s team hopes that will change. Then, of course, rigorous laboratory and clinical testing must follow.