Psychiatry Newsletter - A New Look at Depression in Dementia

A New Look at Depression in Dementia 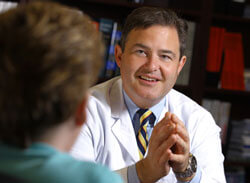 Could late-life depression or dementia have ties to insulin metabolism gone wrong? Geriatric psychiatrist Chris Marano aims to find out.

The sort of depression that afflicts people with Alzheimer’s or other dementias often takes on a different cast from depression on its own. Depression in dementia typically brings more apathy, irritability and sleep disturbance, for example, but less guilt or risk of suicide. Though it’s as intense as classic depression, patients more likely experience small sunny intervals before the clouds return.

Johns Hopkins geriatric psychiatrist Constantine Lyketsos and colleagues coined the term “affective syndrome of Alzheimer’s disease” more than a decade ago, helping spark a national consensus on how to view depression within dementia. Now, what is new at Johns Hopkins is both the search for therapy specific for this depression, and a decidedly different research path into its cause.

Psychiatrist Paul Rosenberg, for example, is targeting a second neurotransmitter system with the antidepressant venlafaxine to boost norepinephrine as well as serotonin in his NIH-sponsored clinical study. Underlying the trial is a discovery in mice that model dementia. Their serotonin-releasing neurons fade away before cognitive symptoms surface—a reason, perhaps, why SSRIs don’t work well in dementia patients.

Neuroscientist Gwenn Smith and geriatric psychiatrist Christopher Marano have focused on the appearance of depression late in life, an event that likely increases the risk of dementia and may even be its earliest expression. Smith has been profiling how this depression alters brain function and structure. Now she and Marano are exploring the tantalizing idea that the cognitive symptoms reflect sugar metabolism gone wrong.

A spate of research worldwide is testing ties between insulin resistance and dementia. “We already know,” Marano explains, “that patients with depression in general risk the slip into insulin resistance and go on to develop diabetes.” So recruits for Marano’s ongoing clinical study undergo glucose tolerance testing as well as brain imaging and memory exams. “We want to see if insulin resistance is tied to the specific brain changes and memory or other cognitive difficulties that we see in people with late-life depression.

“We’re eager to know if that’s true,” he says, because insulin resistance can respond to therapy.