A slower road through dementia 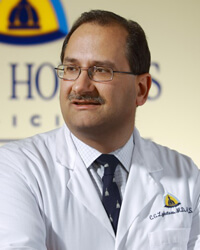 “Alzheimer’s studies in the 1980s suggested a much faster disease for everybody,” says Kostas Lyketsos. “Now we know that’s not true.”

Paging through test results of people with Alzheimer’s disease—those in long-running studies out West that he’s helped direct for years—often puzzled Kostas Lyketsos.

What his discerning eyes and ears told him—he heads Hopkins’ Memory and Alzheimer’s Treatment Center—was that, yes, the men and women were growing worse, but not at the pace that earlier studies worldwide predicted.

So Lyketsos was eager for the bottom line on a recent study-within-a-study that he and colleagues ran to quantify the disease’s progress in 328 elders in Cache County, Utah, with possible/probable Alzheimer’s. For roughly four years, beginning with dementia’s onset, participants were rated on cognition and ability to function. Researchers also checked common neuropsychiatric symptoms like depression, apathy and agitation using a classic inventory.

Results showed that dementia progresses slowly in a surprisingly significant number of patients—more than a quarter of them. “In that group,” Lyketsos says, “thinking ability and life skills change very little for some three or four years after dementia begins.”

And the faster course others describe? That reflects a skewed sample, he explains, “a classic selection bias” in measuring patients who refer themselves to clinics, rather than those in the general population. Clinic patients tend to be younger and more likely to have a spouse who encourages them to seek help earlier for their more aggressive disease.

“There haven’t been many population-based studies,” says Lyketsos, “and they’re important for us to get the complete picture.”

When it began more than a decade ago, the “granddaddy” project—the Cache County Study on Memory in Aging that’s long involved Hopkins researchers—enrolled some 5,000 county residents, most of them seniors. The Utah site was singled out nationally because of uniformity: Folks there have fewer chronic illnesses and most of the population lives at home. Also, life expectancy is longer.

This newest study could yield solid benefits in expanding the drug pipeline. Previous trials of potential Alzheimer’s medicines, for example, measured benefits using a clinic-based yardstick. Yet, Lyketsos says, “it’s possible some drugs given a thumbs-down in clinic-based studies would actually help many patients with less aggressive disease.

“Also, we need to ask what’s special about these slow progressors. Could they tell us how to slow the disease significantly for everybody?”

Another find surfaced from the new study—this one from focusing on the neuropsychiatric symptoms. “Over time, every patient gets them,” Lyketsos says, “but looking at any one person’s course, we see that, unlike cognitive symptoms, these typically fluctuate a lot.” A patient’s aggression, for example, can ebb and flow.

“If these symptoms, the most disabling, can improve on their own, even temporarily,” he asks, “we could hope there’s some way to keep them from returning.”

A brain path for grumpiness

Irritability. Agitation. The two neuropsychiatric symptoms are common in both the mild cognitive impairment (MCI) that can shade into Alzheimer’s disease (AD) and in the disease itself. Of course, even healthy people are occasionally visited by irritability or agitation that arise like so many gnats in the psyche, but their frequency in major brain disease—as well as the anguish they prompt—demands research.

Now a new imaging study ties a probable brain area to those symptoms. It also strengthens the idea of flawed brain conductivity as a source of psychiatric disease.

Recently, Sarah Tighe, a postdoctoral fellow under mentor Gwenn Smith, and colleague Michelle Mielke, explored brains of 45 older patients—about half of them with MCI and half with mild AD—using diffusion tensor imaging (DTI). The technique highlights the white matter tracts that connect brain areas.

Tighe focused on the cingulum, a nerve fiber bundle leading to the frontal brain, specifically to the anterior cingulate cortex that’s linked to depression and bipolar disorder as well as AD.

In imaging the cingulum, however, Tighe’s study probed the path rather than the destination. “We suspect difficulties in the circuit,” she says. “Lately we’ve seen a paradigm shift within psychiatry—one that says focusing on a single brain area as a source of illness is too simplified. Now we’re thinking more about conduction between the bits.”

Fortunately, DTI can pick up flaws in nerve fiber orientation—like finding a missing or misplaced stick in a bundle. A drop in this property is a flag for ailing white matter tracts.

In the study, clinicians evaluated patients for neuropsychiatric symptoms such as apathy and low mood as well as irritability and agitation before they went under the scanner.

“What we found,” says Tighe, “was that irritability and agitation were best explained as having compromised white matter in the anterior cingulum. That makes the structure—and its circuit—suspect.” The cingulum involvement also suggests a common biology for agitation and irritability in late-life depression.