A natural brake for Huntington's? 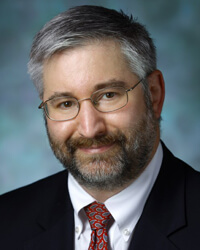 “Feedback loops could be at work in many diseases,” says Russ Margolis. “Will we try to exploit that for treatment? Yes!”

With Huntington’s disease, psychiatrists set their jaws and their shoulders—figuratively, at least—and offer patients what they can: relief of some symptoms, the best palliative care possible and a large helping of concern.

The fatal genetic disorder, from a single, dominant gene mutation, remains incurable. And though the flaw in the HTT gene was made plain almost two decades ago, there’s nothing yet to slow the disease’s progressive dementia, let alone stop it.

But this summer, a Hopkins team led by psychiatrist Russell Margolis reported studies that are rare in that they raise possibilities. Margolis’ group has uncovered a natural feedback loop in the body that might be “gamed” from the outside to shut off or damp down the mutant gene and block its harm.

“The principle is there,” says Margolis, “even though it’s early days by anyone’s measure on a path to therapy.” Early or not, the find is important and not just because it’s a glimmer in an otherwise dark disease.

A variety of strategies exist to stop gene-based degenerative diseases in the brain, some farther along than others. Huntington’s researchers have been exploring siRNA, for example, engineering bits of nucleic acid that—like masking tape—appear able to silence the mutant HTT gene in cell cultures and test mice. “It’s not without hurdles, though,” Margolis says. “Safely getting siRNA to exact targets in patients’ brains may prove difficult. A more natural way may exist, though, to knock down the Huntington’s gene.” It involves the brain’s molecular ability to regulate itself.

That idea has unfolded over the last two years, Margolis explains, beginning with his team’s analysis of target DNA in healthy mice and humans. Work that focused first on the single strand carrying the Huntington’s gene, then on its opposing DNA strand uncovered a new gene. Sophisticated follow-up studies showed the opposing gene to be widespread in the brain and able to be turned on.

Most important was the find that the new “antisense” gene, as it’s called, can inhibit HTT. “It acts as a natural brake,” Margolis says, “and that’s likely why it’s there. It’s part of one of those feedback loops so common in biological systems.”

Some of what’s amiss in Huntington’s, it seems, stems from loop trouble.

When HTT is mutated in disease, the team found, the nearby antisense gene becomes far less active. Lacking the brake, mutant HTT goes unchecked and freely codes for its toxic protein product.

In a satisfying proof of principle, however, Margolis’ group found they could reverse the glitch. After artificially raising antisense activity in cells—fixing the brakes, in effect—the team could find no trace of toxic Huntington’s protein.

Is there therapy in this? The thought is tantalizing. “If you find a drug that tells cells to make more antisense, wouldn’t that, in theory, knock down the Huntington’s gene?” Margolis has already picked collaborators to help find out.