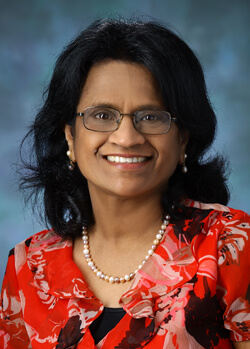 “We hypothesize that repetitive transcranial magnetic stimulation will be superior to sham treatment in reducing symptoms of depression and suicidal thoughts.”

When Vani Rao sees patients who have depression associated with traumatic brain injury, they—and their families—are often desperate for help. Rao, a psychiatrist and director of the department’s Brain Injury Program, knows well the urgency to intervene: The risk of suicide in these patients is four times higher than that of the general population.

Depression is the most common psychiatric disturbance following trauma, says Rao, and it’s often attributed to psychosocial effects, like loss of identity or employment. But brain pathology, she says, plays a significant role—depending on the injury’s site of impact.

“There’s dysfunction of the neuropathways in these injuries,” says Rao. The most common sites of focal injury, the anterior and inferior frontal regions and the tips of the temporal lobes, sit on bony protuberances, “and we know,” she says, “that these regions mediate emotional stability.”

In addition, TBI pathophysiology causes mechanical damage, metabolic disturbances, cytotoxic damage and neurotransmitter changes that can persist for a prolonged period and be associated with neuropsychiatric disturbances, says Rao.

The challenge is that there are no FDA-approved drugs to treat TBI-related neuropsychiatric symptoms or syndromes. Now, however, a new pilot study Rao is leading aims to determine whether repetitive transcranial magnetic stimulation (rTMS) may be an effective treatment. The study, funded through a Department of Defense grant, is the first of its kind in the United States.

TMS, a noninvasive method of brain stimulation that relies on electromagnetic induction using an insulated coil placed over the scalp, has been used successfully for some patients with treatment-resistant depression and those who cannot tolerate the side effects of antidepressant drugs. Unlike electroconvulsive therapy, TMS is associated with a low risk for seizures and cognitive deficits or memory loss.

Rao works closely with Irving Reti, who directs the Brain Stimulation Program and conducts the treatments. He says rTMS is safe, and there’s no need for anesthesia. “Aside from a mild headache in some,” says Reti, “patients have no complaints.”

The study will include a double-blind placebo-controlled trial of 30 patients with TBI of mild and moderate severity. Patients will come in for a 45-minute session five days a week for four weeks and will be followed for an additional three months. Rao and her colleagues will rate the effectiveness of the treatments at each visit and over time using well-validated psychiatric and cognitive assessments.

As part of the protocol, Rao and Reti are also looking at other TBI-related issues, like sleep problems. They will use diffusion tensor imaging to determine white matter changes. “Trauma to the brain can cause a lot of white matter injury,” says Rao, “so we also want to see if electromagnetic stimulation can improve white matter integrity,” something, she adds, that’s never been done before.