Psychiatry Newsletter - A Winning Experiment on a Mouse Model of Depression

A Winning Experiment on a Mouse Model of Depression 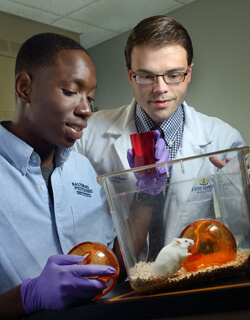 Scientist-to-be Isaiah Thomas in the lab with Zachary Cordner

Ever since he first attended the annual research symposium at his high school, Baltimore Polytechnic Institute, Isaiah Thomas wanted to do a study of his own. “I found it amazing that students were doing these interesting, complicated things,” he says.

For the next two summers, Thomas participated in a program where he worked with other students to investigate scientific problems. Then in his senior year, he enrolled in a research practicum class that pairs high school students from Poly with researchers in Baltimore science laboratories. The collaboration results in a research paper and science fair project.

In addition to performing literature reviews and devising hypotheses and research methods, Thomas worked closely with Cordner to conduct an experiment as part of a larger project to understand depression in the brain.

“The basis was to use a mouse model of depression that we and others have used in the past,” says Cordner, “to figure out if we could treat the mice using an approach called environmental enrichment.”

For the first two weeks of the experiment, Thomas conducted a stress-inducing activity that has been shown to cause depressionlike symptoms in mice. He also recorded characteristics about the mice, such as fur quality, body weight and aggressive behavior.

This first part of the experiment was effective, and the mice began to exhibit depressionlike symptoms. “They didn’t gain weight or groom themselves as well,” says Cordner. “When we gave the mice access to sugar water, something that is normally pleasurable, they didn’t have a preference for it.”

For the next three weeks, Thomas placed the symptomatic mice in an enriched environment—cages with colorful toys, more bedding, and opportunities for increased activity and exercise. Each day, he evaluated the mice for the same characteristics associated with depression.

By the end of the recovery period, “we were able to reverse the symptoms using environmental enrichment,” says Cordner. “It’s a novel intervention that could be translated to humans.”

After working with Cordner to organize the research, Thomas entered the Baltimore City Science Fair, where he won first place in Biological Sciences and was invited to the International Science and Engineering Fair. He also received prizes from the National Institute on Drug Abuse, the Commissioned Officers Association, and the National Organization of Gay and Lesbian Scientists.

The biggest award of all, however, was Thomas’ presentation at his high school’s symposium, where he was inspired to do research in the first place. “I’ve learned so much over the last nine months that is was hard to condense it into a presentation of 10 minutes,” he says. “I wanted to say so much more.”

Soon, Thomas will have endless opportunities for discussion at Tufts University, where he begins classes in the fall of 2015.