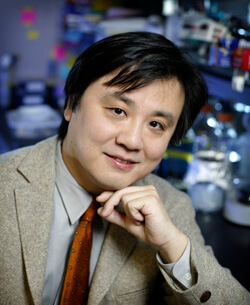 Akira Sawa aims to uncover compounds that target the mechanisms at work in the schizophrenic brain.

The physicians who discovered the first effective medication for schizophrenia—chlorpromazine—did so by luck. The first antipsychotic, it had initially been used as an antihistamine and then as an antiseptic. Only by serendipitous observation did physicians realize that it improved hallucinations, delusions and other symptoms related to schizophrenia.

Today, Johns Hopkins psychiatrist Akira Sawa aims to gain a clearer understanding of the disease’s pathways to develop drugs that specifically target its molecular pathology. To this end, he and his colleagues recently completed a study looking at a cascade of events that disrupt connections between brain cells in the schizophrenic brain. They then examined whether a unique compound could lessen the disturbing activity.

Working with mice that had brain mutations involving a gene associated with schizophrenia, Sawa, Akiko Hayashi-Takagi and colleagues introduced a drug that is one of a class of compounds known as PAK inhibitors. The PAK compounds have been shown in animal studies to provide some protection from brain damage due to Fragile X syndrome, a disease in humans marked by mental retardation. Because the PAK protein can initiate cancer and cell growth, PAK inhibitors have also been tested for cancer.

After the 35th and 60th days of treatment—equivalent to adolescence and young adulthood in the mice—the compound, called FRAX486, appears to halt an out-of-control biological “pruning” process in the brain of the mouse model for schizophrenia during which important neural connections are unnecessarily destroyed. The researchers were also able to partially restore disabled neurons so they could connect to other nerve cells.

“We wish to come across drugs that are able to reverse an already existing defect as well as block future damage for good treatment,” says Sawa. “This compound might have potential to do both.”

Even though the results need to be validated by determining whether the same PAK cascade occurs in humans, the findings in “teenage” mice are an especially promising step because schizophrenia symptoms typically appear in late adolescence and early adulthood, says Sawa. “That we could intervene in adolescence and still make a difference in restoring brain function in these mice is intriguing.”

Ultimately, Sawa hopes the compound provides an opportunity for drug discovery and development that intentionally targets the mechanisms causing synaptic disturbance not only in schizophrenia, but in other brain disorders as well.