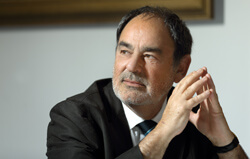 “The cause of OCD is due to a complex pattern of genetic and environmental factors,” says Gerald Nestadt.

“Considering that obsessive-compulsive disorder is one of the world’s more disabling conditions,” says Gerald Nestadt, “we know very little about its underpinnings.” But Nestadt, who has devoted most of his career to understanding the disorder, recently came closer than ever to pinpointing a genetic cause.

For the last five years, the Johns Hopkins psychiatric epidemiologist and inaugural recipient of the Rudolf and Evanne Hoehn-Saric Professorship for Obsessive-Compulsive Disorder and Anxiety Disorders Research led a group of researchers in the second-ever genome-wide association study of OCD.

After scanning the genomes of more than 1,400 people with OCD and more than 1,000 close relatives of people with the disorder, Nestadt and his colleagues identified a strong signal associating OCD with a gene called protein tyrosine phosphokinase (PTPRD). While the study was not quite a “home run,” Nestadt says they got very close.

Previously, PTPRD was shown in animals to possibly be involved in learning and memory, traits related to OCD in humans. Moreover, some cases of attention-deficit hyperactivity disorder (ADHD) have been associated with the gene, and OCD and ADHD have some symptoms in common. Nestadt says the gene also works with another gene family, SLITRK, which has been associated with OCD in animals.

OCD affects an estimated 1 to 2 percent of the U.S. population, and the World Health Organization has called it one of the more disabling medical conditions worldwide. Some of the least disabling forms of the disorder can still add an extra hour to the day’s routine, causing distress and interfering with daily life. But some patients are so disabled that they can’t leave their homes.

“OCD research has lagged behind other psychiatric disorders in terms of genetics,” Nestadt says. “We hope this finding brings us closer to making better sense of it and helps us find ways to treat it.”

Although Gerald Nestadt and his team are closer to understanding the genetics of obsessive-compulsive disorder, he believes that other domains are worth looking into as well. “Whatever is ultimately causing OCD is actually causing something before OCD,” he says. “My hypothesis is that one thing is the trait of doubt.”

In collaboration with other Johns Hopkins faculty, Nestadt is working on imaging and neuropsychology research to identify fundamental traits of OCD, including doubt. “We are trying to define what doubt is, get measurements of it, and test it using functional magnetic resonance imaging,” he says. “We are also working on a behavioral test to see if we can identify doubt and how much of a doubter someone is”