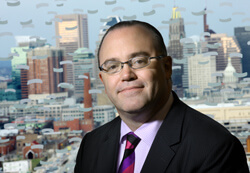 “If we’re going to say ‘yes’ to helping the community,” says Robert Findling, “we need to collaborate.”

In a low voice, as if he’s telling a secret, Robert Findling says, “The supply of child psychiatrists is not even close to meeting the demands that are out there. Depending on how you look at it, there’s more than a 50 percent shortage.”

But Findling, who heads child and adolescent psychiatry at Johns Hopkins, isn’t deterred by these seemingly dire statistics. In fact, he’s working to meet the challenge head-on. Recently, he was named the Leonard and Helen R. Stulman Professor in Child and Adolescent Psychiatry. Thanks in part to this gift, Findling is spearheading an effort to improve access to psychiatric care for young people.

“To do this, we must collaborate,” he says. “We are thinking locally and recognizing that what we do can have an impact globally.”

To start, Findling has been working to build partnerships among three Baltimore entities: The Johns Hopkins Hospital, Johns Hopkins Bayview Medical Center and the Kennedy Krieger Institute (KKI), which is dedicated to helping patients with developmental, brain, spinal cord and musculoskeletal disorders.

After just six months, he says, “We are referring patients between the groups in a much more facile way, so it’s better for children and families. Sometimes when you get care from two organizations, they don’t really speak to each other. Now information can more readily flow.”

The three-part collaboration also supports Findling’s efforts to boost psychiatric services by increasing staff. When he needed a training director for child psychiatry residents learning about the psychiatric diagnosis and treatment of children, adolescents and their families, he identified Roma Vasa, an autism researcher and child psychiatrist at KKI. Now, Vasa pursues her educational endeavors at Johns Hopkins and clinical research at KKI.

With more personnel, there can also be an increase in research, and Findling says the area he most wants to explore is prevention. “Most psychiatric conditions develop during mid- to late-adolescence, and that tells me there is an opportunity to intervene and prevent them,” he says.

Most of the early symptoms that present to a child and adolescent psychiatrist are not specific—irritability, hostility or distractibility—much like a fever, cough or abdominal pain might present to a pediatrician.

“You don’t wake up one morning with a serious psychiatric illness,” Findling says. “We want to look at what’s going on and how we can intervene and prevent it. Why wait until someone is in extremis before you intercede, which is what we currently do in psychiatry.”

In a tone filled with optimism, Findling says, “We have only one goal here: to help children. Our job is to serve them. That’s the privilege of having this endowed professorship.”

The Leonard and Helen R. Stulman Foundation supports work in mental health, health and aging. Leonard Stulman, a Baltimore businessman, philanthropist and Johns Hopkins alumnus, died in 2000, but his legacy lives on through the foundation that he and his wife created.

The foundation established the Leonard and Helen R. Stulman Professorship in Child and Adolescent Psychiatry to improve the quality of and increase access to mental health services for young people. This new professorship was dedicated and Robert Findling installed as its inaugural recipient in April 2014.

Division of Child and Adolescent Psychiatry