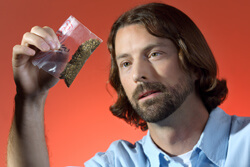 Much like any other drug, there are risks and benefits of medical marijuana, says Ryan Vandrey.

Whether you are for or against the use of marijuana as medicine, 21 states plus the District of Columbia have legalized the substance for medical use. The laws allow qualified individuals to purchase and use marijuana products from dispensaries to treat conditions from pain to anorexia. Here, Johns Hopkins behavioral pharmacologist and cannabis researcher Ryan Vandrey discusses some of the benefits and risks.

What are the benefits of medical marijuana? Isn’t smoking bad for you?

Research has been done with tetrahydrocannabinol, or THC, the primary psychoactive component of marijuana, in pill form. This research finds that the medical benefits of marijuana include management of pain, nausea and spasticity. It is also good for appetite stimulation, especially for people having chemotherapy or people with AIDS wasting syndrome.

And yes, many physicians have a hard time recommending a drug that is smoked. Depending on why a person is using it, though, smoking may be better than swallowing. For example, if it is being used to treat nausea, there is a chance that the person might not be able to keep the pill form down. Plus, in certain cases of acute pain, the effects from smoking are going to happen more quickly. The downside is that compared to oral administration, smoking is much shorter-acting, and of course, isn’t good for your lungs.

You are among a small number of scientists who have made marijuana studies a specialty. Have your studies showed that people can become addicted to marijuana?

Yes. Just as with other kinds of drugs, such as nicotine, people can become addicted, and it can be abused. Using marijuana can affect a person’s ability to work, go to school or have relationships. When people stop using it, they can experience withdrawal symptoms and be unable to quit even though they want to.

However, when it is used for a medical purpose as it’s prescribed and discontinued when it’s no longer needed, the risk of addiction is probably relatively low.

What do people need to know before using medical marijuana?

Data show that about half of adults in the U.S. have tried marijuana at some point. Most move on and don’t have a problem with it. A subset of about 10 percent, however, try it and develop a problematic pattern of use. There is also the risk of having an acute panic or psychotic reaction to the drug, and there’s no way of knowing what kind of reaction someone is going to have. So, people have to recognize the risks associated with it. Again, it’s much like any other drug.

Do you have worries about the trend to legalize marijuana?

Yes. My biggest concern at the moment is the lack of oversight and regulation of the medical marijuana industry. Right now, there is no way to ensure that the marijuana being sold isn’t contaminated, and there’s no oversight making sure that the amount of THC in one product is the same as the next. In addition, there is no ceiling on the amount of drug that can be in a single product, and that can be dangerous. As medicine, the dose needs to be consistent each time it is taken. Medical marijuana needs oversight and regulation, just as food and other drugs are regulated.