A Crystal Ball for Baby Blues 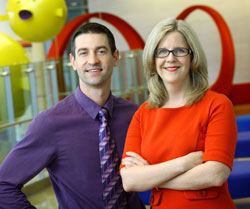 Zachary Kaminsky and Jennifer Payne’s new work makes them suspect that mothers with postpartum depression and women who get premenstrual or menopausal blues have biology in common.

We’d like to say that new mothers who suffer depression have it for a straightforward reason,” says psychiatrist Jennifer Payne. “Estrogen drops suddenly postpartum, and there you are.”

But that’s not the case. “Estrogen certainly is involved,” Payne adds, “but not in the way we’d thought.”

Now a new study is shedding light on what happens for many with postpartum depression (PPD). More than that, it brings hope of a reliable biomarker—one that could be flagged by a routine blood test to predict a pregnant woman’s risk of slipping into PPD.

Payne, who heads Johns Hopkins’ Women’s Mood Disorders Center, would like nothing better than to end the mystery of the disorder, which affects some 10 percent of new mothers in the general population and a third of those with a previous mood disorder. PPD can overwhelm women, of course, but its harm to their children isn’t trivial. Outright infanticide or child abuse aren’t rare. Studies also confirm risks of children’s low self-esteem, behavioral problems and dulled intellectual ability.

The new work from a team led by molecular biologist Zachary Kaminsky acknowledges that only having lower estrogen isn’t sufficient. “Yes, women who experience PPD do so after it bottoms out,” he says, “but all women experience a postpartum drop and most are not clinically depressed. So, what we’re finding is that estrogen’s effect can differ. Women with true PPD are apparently more sensitive to it than others.”

Which means what, exactly?  Seeking that answer involved comparing genes of pregnant women who would develop PPD with those who didn’t. Because differences between the two groups are likely subtle, he and Payne were scrupulous with study particulars.

Payne, for example, provided blood samples from 52 pregnant women treated at Johns Hopkins—those at higher risk of PPD. She demanded tight criteria for postpartum depression, namely, women with a clear episode starting within a month of giving birth. “The literature is messy,” Payne explains. “People call a lot of things PPD, even depression that starts during pregnancy.”

As for which genes to follow in the women, Kaminsky relied on mouse studies. Wanting candidate genes with a solid response to a wash of estrogen, he used that hormone to simulate pregnancy in female mice. He also extracted the mouse DNA to be analyzed from the hippocampus, a site with known ties to mood disorders.

Kaminsky’s focus wasn’t on genes per se, but on genes’ epigenetic “marks”—the molecular tags that can override a gene’s basic programming. In the end, pregnant women who were not destined for PPD showed little change in epigenetic marks of key genes. In “sensitive” women who got depressed, those same genes gained or lost marks.

In the PPD group, two genes stood out as especially changed by high estrogen, Kaminsky found. “How the altered marking pattern could lead to depression is something we’re eager to uncover,” he says. Meanwhile, those genes are looking like a much-needed PPD biomarker. “When we confirmed that they could predict depression 85 percent of the time,” says Kaminsky, “I jumped up and punched air!”

Blood cells, fortunately, look as good as hippocampal cells for predicting. And while it’s early days in ushering the markers into a useful clinical test, “we’re already figuring out what we might do to block PPD in mothers at risk,” says Payne. One possibility is intermittent SSRIs, a successful tactic she uses for women with premenstrual mood symptoms. “In that case, when a woman wakes up once a month with her typical low mood, she takes a single Prozac, for example, and feels better by evening.” The bump in serotonin works, Payne explains.

“Because PPD doesn’t just affect the mother,” she adds, “it’s incredibly important for us to identify early and to intervene.”