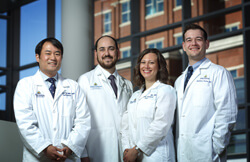 In a patient with diabetes whose glycemic control is not improving despite intensification of glucose-lowering therapy, should the clinician suspect a depressive disorder?

Is it OK to prescribe clonazepam for panic attacks in a patient with a history of substance abuse?

Answers to questions such as these—and hundreds of others—are now available at the tap of a finger, thanks to the resourcefulness of four Johns Hopkins psychiatry residents and the many colleagues they corralled to create an evidence-based clinical decision support tool that brings vital information to clinicians at the point of care. Called the Johns Hopkins POC-IT Guide for Psychiatry, it’s available on the Web and mobile devices, and contains over 160 interconnected sections about psychiatric illness, psychiatric medications, psychiatric emergency care, appropriate referrals and much more.

The brainchild of Paul Kim, Paul Nestadt, Matthew Peters and Traci Speed, the guide was conceived originally as a resource for primary care physicians and mental health professionals such as psychologists and social workers. Primary care physicians prescribe three-quarters of the antidepressant medications in the U.S. and many antianxiety medications.

The idea of the guide quickly won the support of Department Director
J. Raymond DePaulo and Joe Bienvenu, who heads both the Johns Hopkins Anxiety Disorders Clinic and the Psychiatry Residents’ Outpatient Continuity Clinic. Serving as the guide’s co-editors-in-chief, DePaulo and Bienvenu helped the residents and nearly 150 department collaborators get the product written, edited and produced in a matter of two short years. Equally important to launching the guide was the technical know-how of the Johns Hopkins POC-IT Center, which also offers similar guides on antibiotics, HIV and diabetes.

In October 2014, the guide was launched at the annual meeting of the American Association of Family Physicians, where it was well received.

“We learned a lot from the doctors there about what they wanted to know about most,” says Bienvenu. The guide, which incorporates their feedback, debuted to psychiatric colleagues in May 2015 at the American Psychiatric Association Annual meeting. “It is an added benefit that psychiatry residents and medical students also find the guide useful,” says Speed.

Far from being a one-and-done project, the guide will be completely updated biannually and also if a hot topic emerges. “We will follow the model of our Division of Infectious Diseases,” Bienvenu says, “which quickly updates the ABX POC-IT Guide when there’s a new outbreak, like Ebola. We want the psychiatry guide to supplement the knowledge of both new and experienced physicians in all patient settings.”

The Johns Hopkins POC-IT Guide for Psychiatry is available on all major Web browsers and for many smartphones and tablets. To learn more, scan the code or visit bit.ly/HopkinsPsychiatryPOCIT.