Effects of Serotonin Degeneration on Emotion and Memory Networks 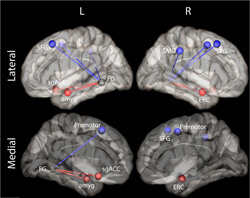 To do so, they measured serotonin system degeneration by imaging serotonin transporter binding with positron emission tomography (PET), and cortical and limbic brain circuits with functional magnetic resonance (fMR) imaging.

In the images at left, the grey spheres are superimposed on the brain images in the fusiform gyrus (FG) of the temporo-parietal cortex that is affected in MCI. Serotonin transporter loss in the cell bodies of origin of the serotonin projections (dorsal raphe nucleus) leads to decreased communication between the FG and cortical regions including superior frontal gyrus (SFG), supramarginal gyrus (SMG) and premotor cortex (blue spheres), and a compensatory increase in communication between the fusiform gyrus and limbic regions including entorhinal cortex (ERC), subgenual anterior cingulate cortex (sgACC) and laterobasal amygdala (red spheres).

These data, say the researchers, suggest that in MCI, serotonin degeneration is associated with alterations of the intrinsic organization of cortical and limbic structures involved in memory and emotional processing.

The project is a collaboration between Johns Hopkins’ Division of Geriatric Psychiatry and Neuropsychiatry, the Biological Psychiatry Research Unit, and the Department of Radiology and Radiological Science.