Psychiatry Newsletter - TMS is still on track for deep depression

TMS is still on track for deep depression 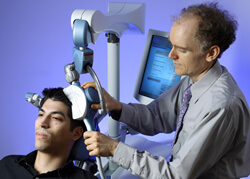 “In TMS,” says Irving Reti, “you stimulate the prefrontal cortex without needing anesthesia, without cognitive side effects.”

TMS—transcranial magnetic stimulation—is a work in progress,” says Irving Reti, head of Hopkins’ Brain Stimulation Program. But the three years that the therapy has been offered for the roughly 20 percent of patients whose hard-core depression resists medicines or psychotherapy “has given us no reason to doubt its potential.”

As treatment has crossed over from experimental to clinical use, many patients with serious disease have improved significantly—some successes are dramatic—and the minimal side effects continue to be like so many crumbs that fall away. Reti has testified recently that the therapy warrants Medicare/Medicaid funding. And his research to fine-tune the procedure continues in the lab and the clinic.

“Our aim,” Reti says, “is to make TMS as effective as ECT,” the medical standard electroconvulsive therapy that Hopkins has long offered patients in danger when deep depressions fail to lift. The hope is to equal or exceed ECT’s track record while keeping the newer technique’s lack of cognitive or other significant side effects.

In TMS, brief, strong magnetic pulses induce electric fields that cause the therapeutic nerve activity in the brain. A plastic paddle delivers said pulses—the result of current traveling a coiled wire in its interior. Holding the paddle close to the scalp, Reti and his colleagues target the left prefrontal cortex—a known site for the action of both antidepressants and ECT. The paddle’s optimal position is still under study, largely because quirks of each person’s brain anatomy make focusing the energy to the ideal area less than textbook. Some patients, for example, are helped more by treating both right and left brain, Reti says.

“As the number of patients getting TMS worldwide increases,” he adds, “these issues should get settled.” Meanwhile, the Hopkins team today administers more pulses per session than when the program began, as pilot studies show that doing so is more therapeutic. Why either more pulses or a shorter time between them is helpful isn’t clear. Nor is TMS’s underlying brain biology.

Reti looks for explanations from the lab. He’s created a mouse model, for example, that’s unaffected by ECT—or, likely, by TMS either—by shutting down one of the animals’ first responders to stimulation, an agent called NARP. Understanding  what’s happening, Reti hopes, will shine light on the cortical and other pathways touched by the stimulation.